Gardaí have seized more than a million euro worth of cars and car parts as part of an investigation into the theft of luxury vehicles across several counties in the Republic and in the North.

Gardaí believe the vehicles were broken up for sale at a premises in West Cork.

Twenty cars, a four-wheel drive and a tractor are among the vehicles that have been seized. The garda operation is on-going.

The operation has been planned over several weeks and involves the Garda Stolen Vehicle Unit and profilers from the Criminal Assets Bureau backing up detectives from the West Cork garda division.

Today is the third day of the operation, but because searches have been on-going throughout that time, details were not made public.

Among the cars seized are BMW, Audi, Volkswagen and Land Rover. All of the seized cars are relatively new, high-value vehicles. At least one of them is believed to be worth more than €100,000.

The operation centres on a premises in West Cork which gardaí believe, while fronted by a legitimate business, was being used to break up these luxury cars for the sale of their parts.

So far, 10 of the cars have been identified as having been stolen in the North. Gardaí are liaising with the PSNI in relation to these cars.

A number of other cars are suspected to have been stolen in the Republic, mainly in counties in the northern half of the country.

The garda operation is continuing, and searches are under way at other locations.

Meanwhile, in a separate investigation in Dublin gardaí are involved in an operation searching a number of containers at a storage yard in Citywest. 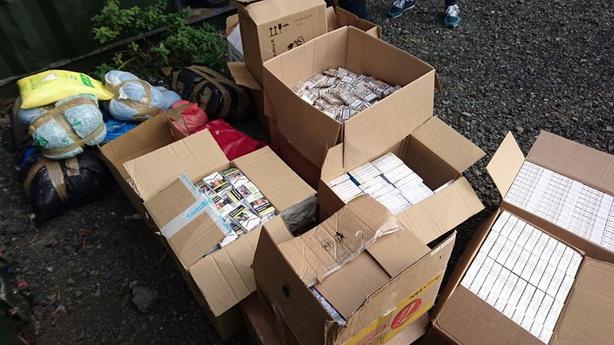 During the course of the search - involving gardaí, Dublin City Council and Revenue Custom Services - a large amount of stolen vehicle parts were discovered.

Over 100 bottles of champagne and a small sum of cash were also seized.

A 27-year-old man is being questioned at Tallaght Garda Station.