The inaugural meeting of the Citizens’ Assembly has decided to hold four weekend-long meetings on the constitutional restrictions on abortion before submitting a report to legislators.

The Assembly's Chairperson, Ms Justice Mary Laffoy, said she is investigating a claim by the pro-life campaign that an assembly member has been expressing pro-choice views on social media and warned that the body’s integrity could be undermined if it turned out to be true.

The 99 ordinary assembly members, chosen by a polling company to be broadly representative of the electorate, joined Judge Laffoy and Taoiseach Enda Kenny in Dublin Castle this afternoon.

The assembly has been mandated by the legislature to report on five topics over the coming year; the Eighth Amendment, the ageing population, fixed term parliaments, referendums and climate change.

Judge Laffoy told the assembly that abortion is the particularly sensitive and contentious issue before them and pledged that openness will be an underlying feature of their work on all five of the topics they will discuss over the coming year.

She said she will probably be calling for submissions next week.

Thanking the members for participating in the assembly, Mr Kenny said the issues they will be discussing in the coming months are "beyond party politics".

The matters to be examined "are deeply complex, hugely challenging and profoundly ethical", he said.

"We chose to go about our business in this way so that as a nation and a society we could move from a position of contention, even contempt and find valuable consensus," he said.

Mr Kenny said their work "in addressing and achieving this vital consensus on behalf of us all will affect - indeed profoundly affect - how we live our individual lives and our national life in the Republic of Ireland in the years to come".

The Taoiseach asked the public to allow the members of the assembly "the necessary space and respect to go about their work".

The members of the advisory group appointed at a closed session are the obstetricians Elizabeth Dunn and Declan Keane, and constitutional lawyers Oran Doyle and Rachel Walsh along with Professor Deirdre Madden, a specialist in medical law and ethics.

Judge Laffoy said it will reflect balance and none of the appointees has expressed a view on the constitutional restrictions on abortion in public.

An Oireachtas committee will discuss the assembly's findings next year.

This morning, a small group of anti-abortion demonstrators assembled at the main gates of Dublin Castle but they had moved away before assembly members began arriving.

Cameramen were asked not to film the 99 citizens before they gathered formally this afternoon in the imposing surroundings of St Patrick's Hall under the direction of their 100th member, Judge Laffoy. 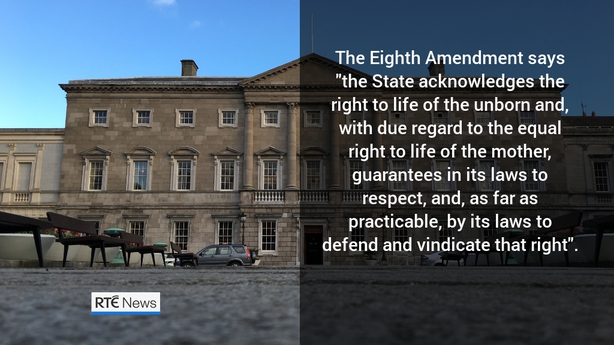 It was passed by a two-to-one majority in a referendum 33 years ago.

After hearing from the Taoiseach, the gathering was addressed by social affairs consultant and barrister Ita Mangan and UCD Professor of Politics David Farrell.

Among its many recommendations was the holding of a referendum on same-sex marriage.

One-third of the convention's members were legislators with the remaining 66 chosen by a polling company to ensure they were broadly representative of the electorate.

The assembly launched today is the first official public consultation on any aspect of the Irish Constitution to exclude legislators.

But its report will go to an Oireachtas committee for further discussion.

It, in turn, will advise the Government and a central point of interest will be whether the Assembly and/or the Oireachtas committee will favour another referendum on the Eighth Amendment.

There were three within a decade of its passage into law, one of which gave Irishwomen the right to travel unhindered for terminations abroad.

Considerable interest will focus on what - if anything - the assembly, legislators and, ultimately, a future government might recommend should be put in the place of the much-debated clause if it was to be the subject of a referendum.

While the pro-life campaign disparages the assembly process as a pretend exercise with a predetermined process, their ally, Senator Rónán Mullen said he trusts Judge Laffoy to be impartial.

But he is not confident that six months allows enough time for such an exercise on the emotive question of abortion.

The dilemma facing the Repeal the Eighth coalition and their allies is whether to push for gradual reform by urging liberalisation in cases of fatal foetal abnormalities and pregnancy because of rape and incest or to urge a total repeal and the ushering in of abortion on demand.

Legislators are acutely aware that just over half of those polled recently on behalf of the Irish Times were prepared to accept the minimalist approach.

Members will discuss the selection of five members of an expert advisory group which Ms Justice Laffoy has said will provide balanced advice to the assembly as it prepares its report which is expected to be delivered by the end of next June.

Four other topics will be discussed by the Assembly over the following six months and similar reports will be delivered.