RTÉ Science & Technology Correspondent Will Goodbody reports from the European Southern Observatory in Chile; where astronomers are trying to cast new light on the universe.

This better be worth the effort, I think to myself.

After three flights, 24 hours of travelling and an energy-sapping journey half way round the world, we drive for several hours through the desert towards our final destination.

The lunar landscape of the Atacama is a fitting backdrop.

The place we are headed is focused firmly on worlds far beyond our own.

Finally, it comes into view. This is no mirage – but an oasis of science in the desert.

The European Southern Observatory’s flagship Paranal site emerges from the terracotta mountains, sand and rocks which stretch as far as the eye can see.

The scientists that inhabit this settlement in the desert aren’t interested in their surroundings though.

Their gaze is steadfastly fixed on the millions of stellar sparkles that one by one light up in the night sky as daylight turns to dusk.

ESO is Europe’s foremost international astronomy organisation, and among the best in the world.

Paranal is home to the Very Large Telescope – the most powerful optical telescope anywhere in the world.

After a quick stop at the Residencia – the cleverly designed purpose built home for the astronomers and support staff of Paranal – we drive up the 2,635m high Cerro Paranal mountain to the VLT.

On the platform at the summit sit four massive rotating cylinders.

The telescopes can be operated on their own; but together they create a giant interferometer, allowing astronomers to see details 25 times finer than with a single telescope on its own.

The light beams are combined using a series of mirrors in underground tunnels to produce a level of precision equivalent to being able to distinguish the two headlights of a car at the distance of the Moon.

The VLT is also fitted with adaptive optics to make blurry images clearer.

Each unit telescope has at least one (they will all soon get four) high-powered laser which shoots a beam high into the atmosphere to create an artificial star.

This can then be used as a guide against which the telescope can be adjusted in order to block out the twinkling effect caused by the atmosphere – something astronomers hate.

The result is that the VLT can be used pretty much all the time.

Each telescope has three instruments fitted to it, designed to look for, capture and analyse a different set of secrets in the night sky.

Elsewhere on the platform, are four moveable smaller auxiliary telescopes with 1.8m mirrors.

They can be precisely placed in observing positions to collect light which is then also fed into the interferometer.

By doing so, they can ensure the VLT operates every night, even if one of the main unit telescopes is unavailable.

Paranal is also home to two large survey telescopes – VST and VISTA – which scan large sections of the night sky quickly and deeply.

Together they are capturing a vast catalogue of images for astronomers to work from in years to come. 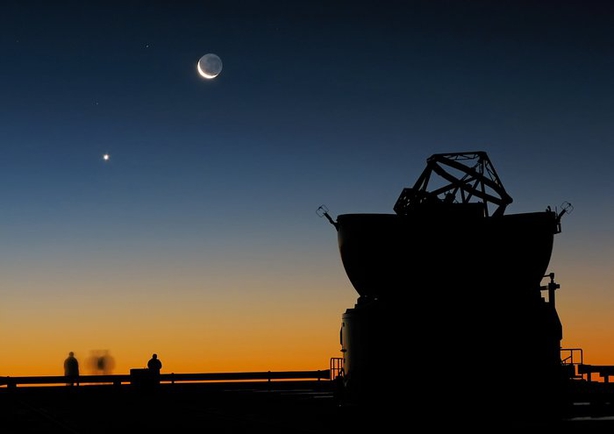 The eye-opening moment, however, comes as the Sun sets.

The sleeping VLT giants awake, along with their astronomer masters who sleep during the day.

The telescopes tilt and spin, the shutters come up and as the Sun dips stunningly below the horizon, the occupants of the operations room get to work.

Why they chose the middle of Atacama desert as the location to build this observatory becomes abundantly clear.

The stars, planets, galaxies, nebulae and other stellar spectacles leap out of the dark sky.

This is one of the driest, clearest places on Earth, with no light pollution and clear views into the centre of our galaxy.

Little wonder this is amongst the best places on this world to observe what’s going on in others.

Through the night and into the dawn, the staff and visiting astronomers, supported by telescope operators, and other visiting researchers, work through their list of tasks.

Searching, capturing, analysing, until the Sun lays the night to rest again, followed by the astronomers.

The next day we travel the 20km across to nearby Cerro Armazones.

The winding paved road we drive up to the 3,000m high summit is new, built to pave the way for something big and special to come.

This is the site for the European Extremely Large Telescope or ELT.

A project as large in ambition as it is in physical scale, it will become the biggest most powerful optical telescope on Earth, by some distance.

Its main mirror will be 39m in diameter, the size of half a soccer pitch, and large enough to potentially revolutionise our perception of the Universe, much as Galileo’s telescope did, 400 years ago.

The mirror will be made from 800 hexagonal segments, each 1.4m across, making it capable of gathering 15 times more light than today’s largest optical telescopes.

The project will cost a billion euro to complete. Work is under way: the top has been blown off the mountain to flatten it and building will soon begin.

It’s hoped that first light will be achieved in 2024.

Its main focus will be the search for extra solar or exoplanets that are orbiting stars outside of our own solar system, some of which could potentially support life.

It will also be used to probe the earliest stages of the formation of planetary systems, and endeavour to answer questions around planet formation and evolution.

Five hours’ drive away, overlooking salt flats and surrounded by towering volcanoes of the Chilean Andes, is the Atacama Large Milimeter/submilimeter Array or ALMA.

A collaboration between ESO, US and East Asian astronomy organisations, it sits on the Chajnantor plateau, at a literally breath-taking altitude of 5000m.

After a night in the nearby sleepy tourist town, San Pedro de Atacama, to acclimatise further to the altitude, we set off for the observatory.

Blood pressure must be checked, as well as the saturation of the oxygen in our blood, before we are allowed travel to the top.

The drive there takes us through different layers of strange vegetation, only able to live at specific heights.

But what lives at the top is truly unique.

66 radio telescope antennae sit in clusters and alone, spread out across the flat surface. 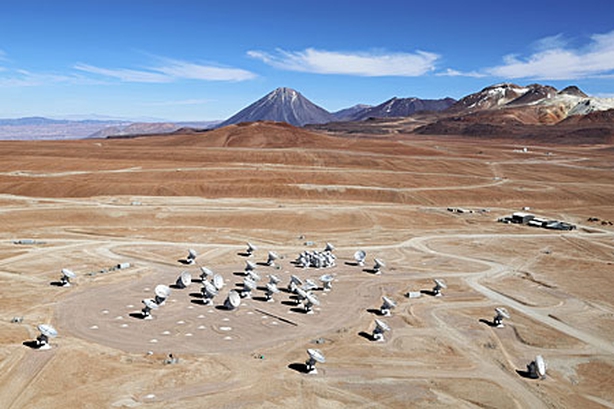 50 of them are 12m in diameter and their signals are brought together as a single telescope.

They are complemented by four 12m wide dishes forming a compact array, and a further dozen 7m wide antennae.

They can all be moved by giant transporters up to 16km apart, giving the telescope a powerful variable “zoom”.

ALMA delves into the universe, gathering light at millimetre and submillimetre wavelengths.

With it, astronomers in the operations building back down the mountain can look into the coolest parts of space, studying molecular gas and dust, as well as radiation left over from the Big Bang.

It’s an extraordinary instrument, and an amazing sight to behold.

We can’t stay long at the summit though. Anyone involved in prolonged physical work needs to use supplementary oxygen. 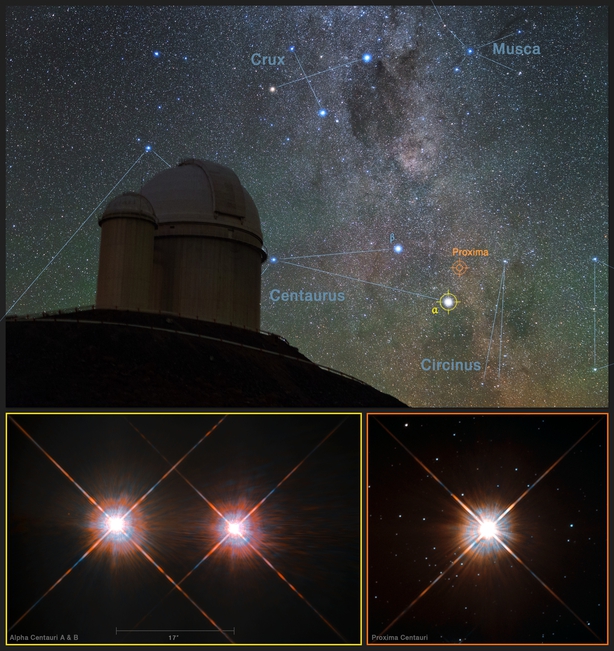 Together the ESO facilities in Chile have been at the forefront of some of the most significant astronomical discoveries of the past half century.

And the achievements continue today.

Just recently, a team of astronomers using ESO facilities at La Silla announced they had found Proxima b - a potentially habitable planet orbiting the star that is nearest to our solar system.

It will surely join ESO’s other existing top astronomical discoveries, which include:

-          - the connection between gamma-ray bursts, supernovae and merging neutron stars

Where do Ireland’s 150 or so professional and full-time research astronomers fit into all this?

Well longingly looking in from the outside.

Ireland is currently not a member of ESO, despite many astronomers here wishing it were, and therefore has no automatic right of access to the facilities.

But it is on the cards.

That’s not a definitive commitment to join and the timeframe on it is 2018. However, discussions have begun already and are progressing.

The rub though is the cost.

It’s estimated it will cost around €14m in upfront fees to get in, and then around €2m per annum in membership fees.

However, it may be possible to spread the entrance fees over a prolonged period, perhaps up to a decade. 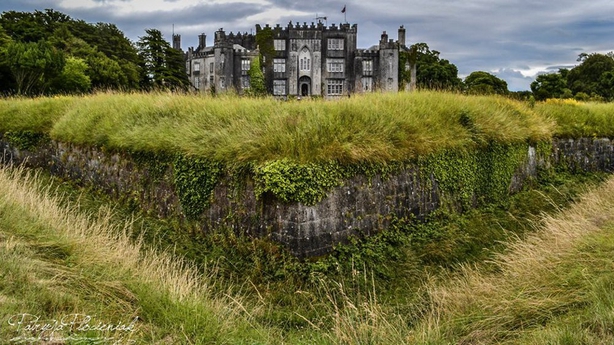 Ireland has a strong tradition of astronomy, dating back to the Leviathan telescope in Birr Castle, and continues that tradition today through a relatively small but very active group of astronomy professionals with diverse research interests who are spread among institutions around the country.

ESO membership would give them much easier access to ESO telescopes and instruments, as well as to collaborators from whom they could grow their knowledge.

In conclusion though it recommended against membership, saying the cost was high, would require an increase in the departmental budget, and that would come at a very high opportunity cost from elsewhere in the science budget.

Supporters of the entry bid say the net cost would be minimal though.

ESO endeavours to ensure that a significant amount of what member states put into the budget, they get back in the form of contracts to domestic industry.

The amount isn’t guaranteed, but the opportunity is there, and Irish companies in the sector have the experience of competing for European Space Agency contracts in the same way.

The exposure those companies would also receive to new ideas and technology would also be valuable to the country, proponents say, and lead to a multiplier effect in the wider economy.

Finally, there is a strong outreach argument for membership, as astronomy is considered a great way of getting people, particularly children, involved in science, and ESO is particularly active in this area.

Astronomy though is not a research priority of the Government, whose focus is primarily on science with an economic impact.

And there will be those who argue the money would be better spent on other more pressing areas of science, like biomedical research or climate change.

Outside science, there are many public services which could benefit from a cash injection of several million a year.

The indications, though, are that it is more a matter of “when” than “if”, Ireland joins ESO.

There may be a cost, but clearly there is also a huge amount to gain.