The Garda Representative Association is to ballot its 10,000 members as to whether they are willing to take part in industrial action over their pay and conditions.

The GRA has rejected the Lansdowne Road Agreement, and as a result, members are currently subject to an increment freeze.

They are also frustrated over additional working hours imposed under the Croke Park and Haddington Road Agreements, and at the loss of allowances worth around €4,000 during the economic crisis. 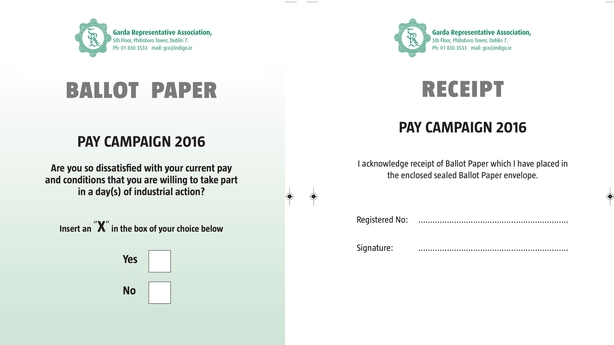 The question on the ballot paper reads: "Are you so dissatisfied with your current pay and conditions that you are willing to take part in a day(s) of industrial action?"

Members are given until 5pm on 26 September to return their ballot papers.

The Department of Justice said that there was no single specific prohibition on striking by members of An Garda Síochana.

However it said that a combination of provisions in law, including the Industrial Relations Act of 1990 and garda discipline regulations effectively precludes strikes.

In a letter accompanying the ballot paper, GRA General Secretary Pat Ennis said that it is the association's policy to reverse what he called the "searing" pay cuts, as well as protecting pensions and employment levels.

He told members that it is of "paramount importance" that all members take this opportunity to express their views on whether they are so dissatisfied with their pay and conditions that they are willing to take part in industrial action.

He states that the decision to take action is the member's individual choice.

However he goes on to warn: “If you take action that involves a partial or complete withdrawal of services, you could be found in breach of discipline. Further information will be disseminated following the ballot result."

He also stressed that the ballot is a secure process, and that a member's response will not be linked to their identity.

Mr Ennis said the GRA does not accept the Government's current position of the continued reduction of pay and the withholding of entitlements because of their refusal to "capitulate" on the published terms of the Lansdowne Road Agreement, while the Government had not yet discharged its full responsibilites under its predecessor - the Haddington Road Agreement.

He described the Government's current approach as disproportionate, unfair and inequitable.