Ireland has won a second silver medal at the Olympic Games in Rio.

President Michael D Higgins congratulated Murphy on her achievement, saying her success is even more welcome and deserved after the disappointment of her 2012 Olympic medal race.

The 26-year-old sails with the National Yacht club in Dún Laoghaire in Dublin. Murphy was briefly leading the medal race and had the gold medal in her sights at one stage but Marit Bouwmeester from the Netherlands finished well to secure the gold.

The medal race got under way in Rio a day later than originally scheduled as weather conditions improved for sailing on Guanabara Bay.

In a statement, President Higgins said: "Her performance today capped a series of outstanding races. She went to Rio with an Irish tricolour on her sail, and she has made us all very proud.

"On behalf of the people of Ireland, I want to congratulate her on this achievement, and to thank her family and friends for their sustained support for her, and for helping her become such a positive role model for budding athletes everywhere."

It is Ireland's second medal of the Rio Games after the O'Donovan brothers from Cork won silver in the men's lightweight double sculls on Friday.

Taoiseach Enda Kenny said Murphy gave an "outstanding performance", and that her win is testament to her "hard work, dedication and talent".

He said it was "just rewards for the considerable sacrifices made in pursuit of this Olympic success". 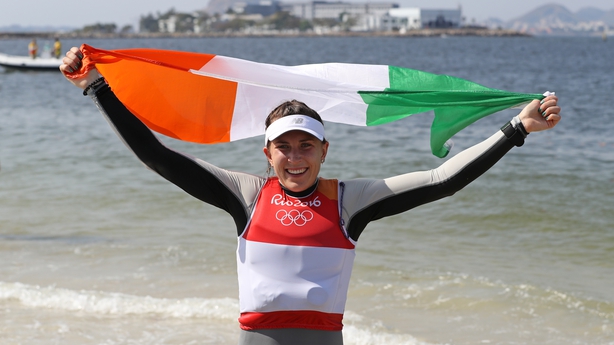 Minister for Sport Shane Ross also congratulated Murphy on her win, describing her as a "fantastic role model for all young athletes".

The minister said: "Annalise has worked so hard not just for the last week but for the last four years, to overcome the frustration of 2012 and win an Olympic silver medal at Rio is no more than she deserves."