A four-year-old boy who was severely disabled following failures of care at Portiuncula Hospital in Co Galway has been awarded €2.4m in damages.

Eoghan Dunne, from Tullamore in Co Offaly, had been admitted to the hospital on 3 August 2012 following a GP referral.

The then 11-month-old boy had developed a fever and become breathless and lethargic.

Lawyers for the Dunne family told the High Court that Eoghan had been in "severe respiratory distress" while under observation at the hospital, and had a very high heart rate.

They said antibiotics should have been administered when the child was first admitted.

12 hours after his admission, Eoghan was transferred to Temple Street Children's Hospital in Dublin.

He had developed septic shock and later suffered cardiac arrest.

He was left with major neurological damage and spent six months in hospital.

The Dunne family received a report on the care provided to Eoghan in February 2014 - they had been unaware that a review of his treatment had been undertaken by the hospital.

Today's interim settlement, of €2.4m, covers the next four years. The case will be reviewed in July 2020. 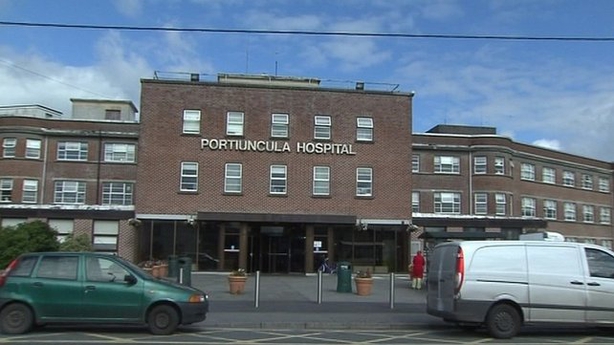 An apology on behalf of Portiuncula Hospital was read to the court.

Its general manager, James Keane, apologised for the failures of care in Eoghan's treatment, and for the manner in which an internal review of that treatment had been undertaken and communicated to the family.

In an emotional statement read to the court, Eoghan's mother Teresa described the pain her son had endured over the past four years as "unbelievable".

She said Eoghan would never play football, go to college or fall in love. She said she did not know if she would ever see him take his first steps.

Ms Dunne said she forgave the staff at Portiuncula Hospital for what she said were "human mistakes".

Approving the interim settlement, Mr Justice Kevin Cross said that despite criticism of what he described as "compensation culture", litigation was the only way that families like the Dunnes could achieve justice.

He said it would be helpful if liability could be admitted earlier in such cases.

In a statement outside the court, Eoghan's father, Ronan Dunne, said the failures in care at Portiuncula Hospital had had a "catastrophic impact" on his son's health.

He said Eoghan now had epilepsy, was visually impaired, could not walk or talk and would need 24-hour care for the rest of his life.

The family said they would never understand how unprepared the hospital had been for Eoghan's admission, how there had been "such difficulty identifying competent staff to transfer him", or how HSE guidelines on sepsis treatment could have been ignored.

They also said they could not understand the subsequent decision to review Eoghan's treatment without their knowledge or input.

The couple said they would never have known of the report had the case not come "under public scrutiny".

They described Eoghan as a "beautiful, happy little boy" who was adored by his family, and who charmed everyone he met.

They said they were relieved to have reached a settlement in the case, but pointed out that the State had only this week accepted liability, and the hospital had only apologised to the family today.

The Dunnes said the family had endured four years of "incredible stress and worry" and had put everything they had at risk to progress the case.

They said in that time Eoghan had lost out on possible therapy and treatment for his injuries at "a vital developmental stage".