The Government and the British government are set to discuss the fallout from the Brexit vote for the first time tomorrow.

Minister for Foreign Affairs Charlie Flanagan and Northern Ireland Secretary Theresa Villiers will talk about the impact of the referendum on cross-border relations when they meet in Belfast.

Meetings will also take place with Northern Ireland's First and Deputy First Ministers and there will be separate discussions on the divisive issue with SDLP leader Colum Eastwood and Alliance Party leader David Ford.

Mr Eastwood has vowed to block any attempts to drag Northern Ireland out of the European Union against its will, while Mr Ford was another advocate of the Remain campaign.

In Northern Ireland, 56% of people voted for Remain.

Speaking ahead of the visit, Mr Flanagan said: "It is also my first visit since last Thursday's referendum and I want again to reassure people that the Irish Government in its contacts with EU partners continues to emphasise that the Northern Ireland and all-island dimensions will be an area for priority attention in all post-referendum negotiations processes, including in relation to the status of the border."

The implementation of the Stormont House and Fresh Start Agreements as well as the ongoing work on the legacy of the past and the Government's commitments to north-south infrastructural development will also be on the agenda.

Mr Flanagan added: "My meetings are a welcome opportunity to demonstrate the continuing priority the Government attaches to the ongoing work to support stability, reconciliation and prosperity in Northern Ireland, through the full implementation of the Good Friday Agreement and subsequent agreements." 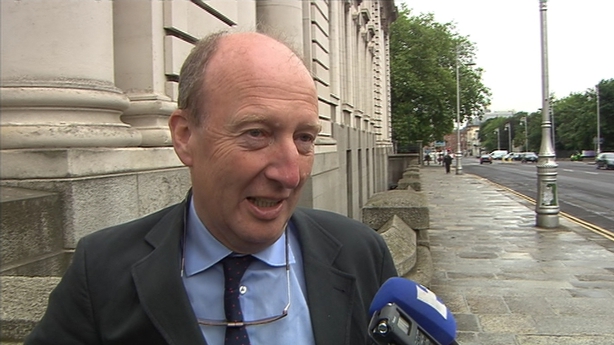 Earlier, Minister for Transport, Tourism and Sport Shane Ross said Ireland is in the worst position of any country in Europe because of the decision by the UK to leave the European Union

Mr Ross made the comment on his way into the Cabinet meeting this morning where Taoiseach Enda Kenny was expected to outline the Government's proposals to deal with the fallout from Brexit, ahead of today's European Council meeting.

Mr Ross also said there is a need for calm following the British decision. "We can't get hysterical", he said.

He added that the Taoiseach needs to make a special case for Ireland when he meets EU leaders later.

Ireland's interests are threatened by the decision by Britain to leave the EU and the Government has to "make a special pleading". "I expect we are in the worst position of any county in Europe", he said.

Yesterday in the Dáil, Mr Kenny outlined Ireland's role in the process of Britain leaving the EU.

He said there would be early bilateral discussions and a Government framework will centre on Northern Ireland, the border and the Common Travel Area.

This morning, Minister for Housing and Local Government Simon Coveney said the focus for the Government following Brexit has to be on protecting Ireland and Irish interests.

He said this is not straightforward and Ireland is in a unique position because of where we are geographically and because of the make up of this island.

Mr Coveney said Ireland will expect and demand the appropriate response from other EU countries to the position we find ourselves in.

Meanwhile, Minister of State in Departments of Finance and Public Expenditure and Reform Eoghan Murphy said it is important that Brexit is not rushed.

Speaking on RTÉ's Morning Ireland, Mr Murphy said all players in the process need to take their time in managing the situation and respect the decision of the UK.

'Ireland's voice will be heard at Brexit talks in Brussels'

Mr Murphy said Ireland has its own particular issues that it will be pushing at EU talks (such as the common travel area) and the most positive outcome for Ireland would be for the UK to remain in the Single Market.

"We have a very strong case to make because of our geographical location but also because of our historical position with the UK and so we'll be making that case", he said.

"It's the beginning of that process so it's a chance for us to stake out our position insofar as the other partners in the European Union are concerned.

"Certainly for us a positive outcome to the situation would be if the UK remained within the market and having access to the Single Market."

Which trade model could Britain try to replicate after leaving the EU?