President Michael D Higgins has congratulated the Republic of Ireland football team in progressing to the knock-out stages of Euro 2016.

"Tonight's game was a wonderful achievement and I want to extend my warmest congratulations to the Republic of Ireland team, the coaches and all those who made this well deserved success possible.

"All of those interested in soccer will welcome the fact that now both Irish teams have made it through to the knock out stages of the tournament, and remain in contention for the Henri Delaunay cup.

He went on to pay tribute to the Irish fans who he said "have earned widespread acclaim for their behaviour in France.

A late Robbie Brady goal secured a 1-0 win over Italy in Lille and it means Ireland will now face France in Lyon on Sunday. 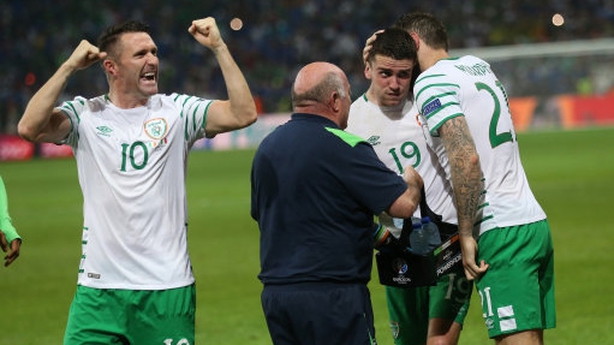 Check out RTÉ Sport for full coverage of Euro 2016.