Stormont Health Minister Michelle O'Neill announced the decision on a visit to an LGBT advocacy organisation in Belfast.

A similar ban was lifted in England, Scotland and Wales in 2011 and replaced with rules that allowed gay men to give blood 12 months after their last sexual encounter with another man.

The lifetime ban had been retained in Northern Ireland by successive Democratic Unionist health ministers.

Ms O'Neill took over the health portfolio last week in the wake of the Assembly election and the decision on the blood ban is the first major announcement of her tenure.

It is understood the change will not be opposed by her DUP colleagues in the powersharing administration.

The one-year deferral system operated in the rest of the UK is now set to become law in Northern Ireland. 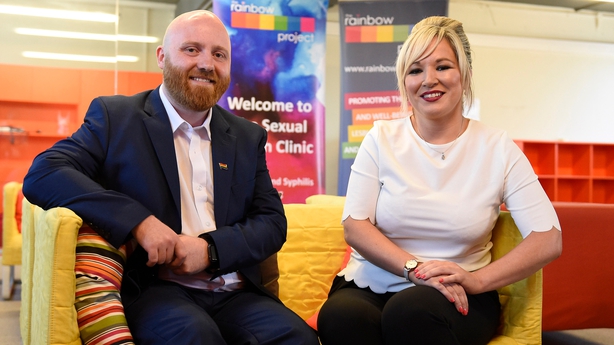 Ms O'Neill said substantial new evidence showed the risk of contracting HIV from donated blood is lower with a one-year deferral than with a lifetime ban.

"My first responsibility in this matter is patient safety," she said

"Evidence from across the UK has provided assurance that the risk is lower with a one-year deferral.

"My decision is based solely on the evidence regarding the safety of donated blood.

"The safety of donated blood depends on two things: donor selection and the testing of blood.

"Every blood donation is tested for HIV and a number of other organisms.

"Not even the most advanced tests are 100% reliable, so it is vitally important for every donor to comply with any deferral rules that apply to them.

"I will instruct the NI Blood Transfusion Service (NIBTS) accordingly. To allow NIBTS adequate preparation time, the new policy will come into effect on September 1 2016."