The National Council for Special Education has said it has "quite a number of concerns" about schools applying what it terms "soft barriers" to discourage some students with Special Educational needs from applying for admission.

The council was responding to an RTÉ analysis of data, which shows that religious-run secondary schools are significantly less likely to cater for students with special needs compared to State schools.

The analysis shows that ETB – formerly known as VEC – schools, and community and comprehensive schools draw down significantly more special needs resources per pupil from the State, indicating that they enrol a higher number of students who need the resources.

It finds that these State schools receive on average two thirds more SNA hours per student than the so-called "voluntary" or religious-run sector, and over 40% more resource hours.

The NCSE said it has heard of schools saying to a parent that that their son or daughter might be "better off" going to another school that might be "more suitable" for them.

It said forthcoming legislation dealing with school admission policies will give it the power to override such barriers and instruct schools to admit certain students.

It also said it wants to reassure all parents that they have the right to send their child to any school, and that all children who qualify for additional resources will get them, regardless of what kind of school they attend, or wish to attend.

RTÉ's analysis is based on the proportion of resource teaching and special needs assistant hours granted to post-primary schools relative to the amount of students they have enrolled.

Those hours are allocated by the National Council for Special Education.

Across all post-primary schools, the average resource hours allocation is 18 hours for every 100 pupils enrolled.

Resource teachers and special needs assistants support students with a wide range of learning and other kinds of disabilities.

The provision of resource teacher hours and SNAs generally correlates with the level of need among a school's student population.

Across all post-primary schools, the average resource hours allocation is 18 hours for every 100 pupils enrolled.

The average SNA allocation is 0.7 hours per 100 pupils. 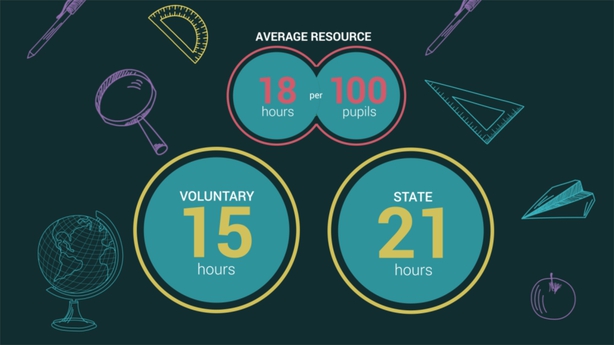 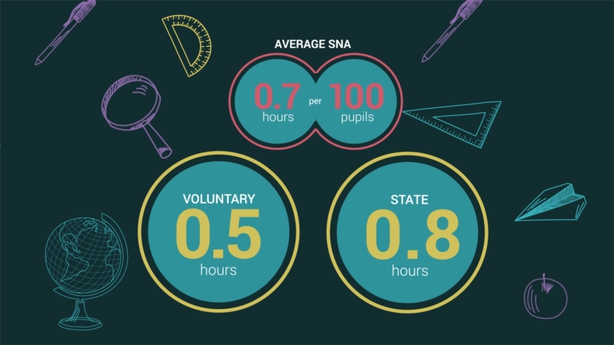 The country's voluntary schools – the vast majority of which are Catholic run - receive an average resource hours allocation of 15 hours per 100 pupils.

The Joint Managerial Body, which represents the voluntary schools sector, has said a number of factors may be influencing the imbalance.

It says only 10% of its schools have DEIS or disadvantaged status, compared to half of ETB schools.

DEIS schools are often more attractive to the parents of children with special needs because they have smaller classes and additional resources.

It says there are more girls than boys attending its schools. Some disabilities, such as autism, are far more prevalent in boys.

The JMB also says in its experience there is a broad equivalence between schools located in the same areas, regardless of which sector they belong to.

However, principals and teachers in State schools frequently complain that some schools "cherrypick" students, or erect what they call "soft barriers", and that their sector accommodates a disproportionate share of children with disabilities as a result.

But there is a wide disparity within the sector, with a minority of voluntary secondary schools accommodating an above average proportion of students with special needs. 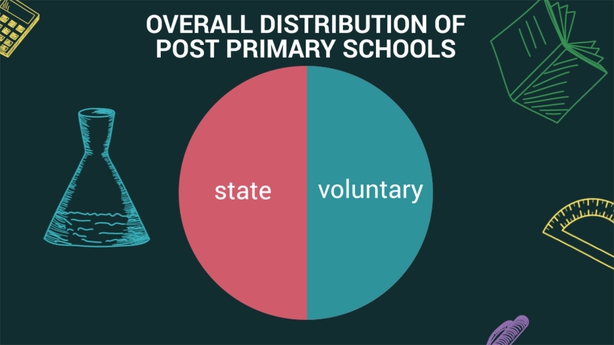 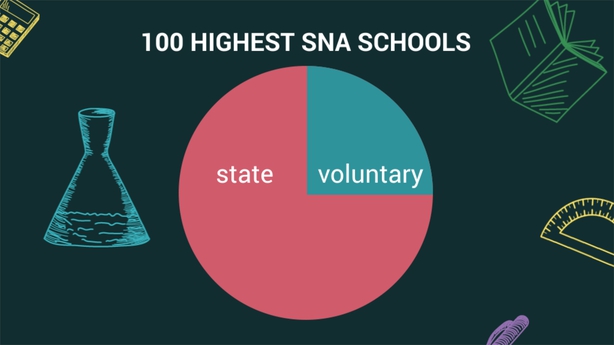 The remaining 75% are State run.

At the other end of the scale, of the 100 schools with the lowest allocation of SNAs per student, the majority, almost 70%, are religious run. 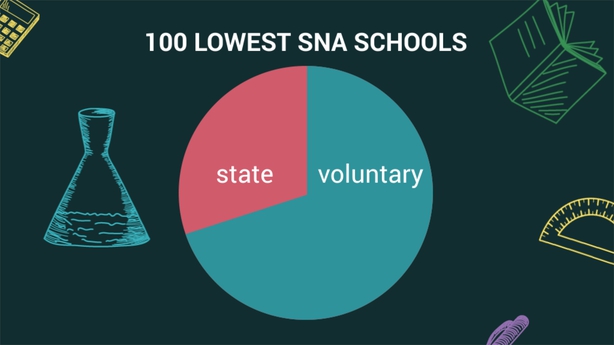 When it comes to the allocation of resource hours the picture is very similar.

Of the 100 schools with the lowest per pupil allocation, indicating the schools that are least likely to accommodate students with disabilities, more than 80% are religious-run secondary schools.

Fee-charging schools also appear to be in general less likely to cater for pupils with special needs.

70% of fee-charging post primary schools receive a below average per student allocation of resource hours. 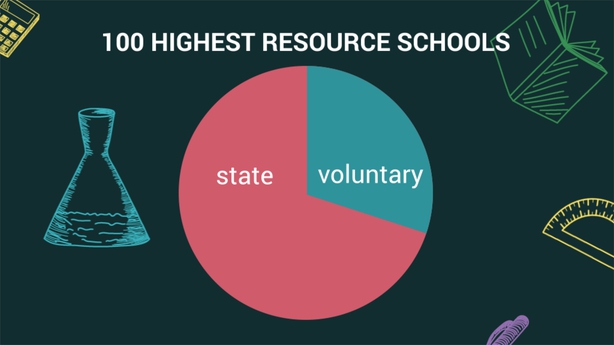 Resource hours are additional hours of teaching generally provided to students with intellectual or physical disabilities, or behavioural conditions.

These include disabilities such as autism or Down syndrome, conditions that are prevalent across all social classes.

A student with autism will typically be entitled to just over four hours additional tuition per week.

A teenager with a hearing impairment may get three-and-a-half hours.

Students with emotional behavioural disturbances may receive an additional three hours per week.

SNAs are generally employed to help students who need physical support to manage their school day. They may for instance need help with toileting.

The JMB has said its schools are open and inclusive. It says it has consistently argued that more voluntary schools should be given DEIS status and that studies show that pupils with special needs in DEIS primary schools tend to transfer to DEIS second level schools.

The JMB also says its sector is under-represented in new schools in urban areas where there may be demographic disadvantage.

It says "parents will choose what they consider to be in the best interests of their child and will invariably look at the resources in the school".