A man who caused the death of a young mother and seriously injured her baby when he fell asleep at the wheel and lost control of his car has been jailed for two years.

His lawyers had asked the court to consider a suspended sentence. They said his sudden onset of sleep could not have been foreseeable.

However Judge Pat McCartan said he had to send out a message to the community that driver fatigue was a phenomenon that had to be in the minds of all drivers and must be reacted to when recognised.

He also banned Handley from driving for ten years.

The judge said Handley was a good man with an impeccable record until the date of the accident but he had to impose an immediate custodial sentence because of the scale of the consequences of his driving when he ought to have been alert to the oncoming presence of tiredness.

The court heard the 31-year-old mother was killed instantly when she was hit by Handley's car as she walked with her three-month-old baby.

Witnesses said the car had crossed onto the wrong side of the road "without warning, like a rocket" and had struck Ms Dunne and the pram from behind.

The driver behind said the car never slowed down and there were no brake lights.

Ms Dunne was instantly killed and the baby's pram went under the car and out behind it. The baby suffered serious injuries including internal injuries and a number of leg fractures.

The court was told that Garda experts had concluded that driver fatigue was the most likely cause of the accident.

There was no evidence that Handley had lost control of the car due to any other factors such as distraction or a medical condition. 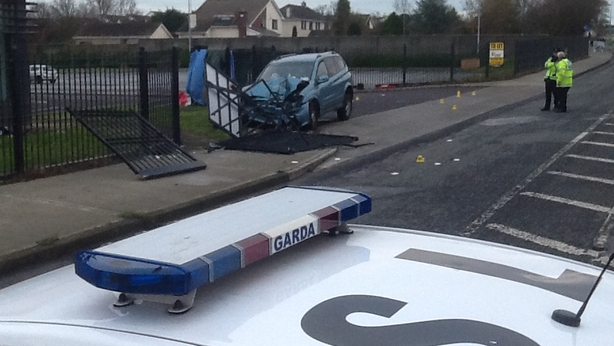 He told gardaí he had four hours sleep the night before but this was not unusual for him and he did not feel tired on the day.

He had been to the gym the previous evening, had gone to bed after 12am and got up at 5am and went back to the gym for a spinning class. The accident happened just after 12.30pm later that day.

He also told gardaí he could not remember what happened or how the incident occurred.

He believed doctors had told him he had a mini-stroke but later in garda interviews accepted it was possible he could have fallen asleep at the wheel.

Prosecuting counsel Dominic McGinn said garda reports made reference to driver fatigue and said it did not manifest itself without warning.

He said driver fatigue could result in "microsleeps" which can last up to ten seconds while a driver still has their eyes open.

He said during a microsleep lasting just four seconds a car can travel the length of a football pitch.

In a victim impact statement the family of Olivia Dunne said they would never come to terms with her senseless death.

They said she had been out walking with her daughter and particularly chose that route because of the safety provided by the wide footpath.

The statement read by a prosecution barrister said they still had nightmares about Olivia's last moments and baby Éabha's fight for her life.

Many of the family members were on the scene before the emergency services because they live close to the scene of the accident.

The statement described the 31-year-old teacher as hard working, caring and generous, who always followed the rules and was safety conscious.

It said her death had deprived her daughter of her mother for the rest of her life.

The mother and daughter had a little more than 100 days together.

The family said hearing baby Éabha's cry was "unbearable because we know there is no Mammy for her to run to".

They said all she had was a photograph of her mother but soon she would start to ask questions about what had happened.

The statement also outlined in detail the effect on each family member of Olivia's death.

It said her husband could not attend court because he never wanted to set eyes on the person responsible for her death.

They said the trips to court were made worse by the fact that the plea of guilty only came earlier this year.

Counsel for the defence Colm O’Briain said the court had often dealt with dangerous driving cases where there were aggravating factors such as speed or alcohol.

He said this was not one of those cases. He said Handley had not been out the night before, he had merely been to the gym and had spent the morning with his family.

There was no lifestyle behaviour or conduct which would lead a man to expect that he would be afflicted by tiredness.

He asked the judge to assess the level of moral culpability involved.

He said dangerous driving is driving which is objectively viewed as dangerous but the prosecution had accepted that there was no conscious control over the driving at the time.

He said Handley had expressed extreme remorse and repeated that today on his behalf.

He had written a letter of apology a month after the incident but the family did not feel able to receive it at that time.

He had also expressed to doctors that he would have preferred to have been killed himself than be responsible for the death of a young mother.

He had also told gardaí that "no words can say how sorry I am".

Mr O’Briain said the reason for the delay in the guilty plea was because Handley had undergone extensive medical testing by sleep experts and other doctors which took 13 months to produce reports.

He said Handley had always considered himself morally responsible for the death of Ms Dunne but believed medical tests might have provided an explanation.

He asked the court to accept the plea as an early guilty plea.

He said he was a man with a full work history who is now the main carer for his ill wife despite being separated from her.

He asked the court to balance on the one hand the serious consequences of the incident with the personal circumstances of Handley and the unusual circumstances and the absence of aggravating factors.

"He was driving his vehicle in a standard fashion and it appears he must have passed out or fallen asleep and the plea is entered on the basis the he must have had some advanced notice of that although he had no memory of that."

He said taking into account Handley's behaviour in the hours before the accident  it was a case where the risk of sudden onset sleep was not objectively foreseeable.

He asked the court to consider a suspended sentence.

Judge McCartan extended his deepest sympathy to the family for the "monumental loss suffered".

He said nothing the court could do could ever begin to address or seek to put right the serious and enormous loss and tragedy occasioned by the event.

"We are here to see justice done and justice of itself requires a balance between the wrong on the one hand and on the other his own position and how the community is best served."

He said on the one hand there was incredible and immense loss, needless and pointless in the young life of a talented teacher and on the other side there was the accused man who was nothing more than a very decent hard working and caring man of impeccable character.

He said he was going about his ordinary business when the incident occurred.

However he said he could not accept it was a sudden onset of sleep as suggested by the defence because that differed with the expert opinion which said it is not sudden, it creeps up and will cause a driver to slowly realise their faculties are beginning to to suffer.

The judge said there was no doubt that many of us had experienced the same phenomenon and react by rolling down the window before realising it is time to pull over.

The judge said the scale of the consequences of his driving when he ought to have been alert to the oncoming presence of  tiredness he must impose an immediate custodial sentence and also send out a message to the community that fatigue is a phenomenon that has to be in the minds of all drivers.