A Boeing 767, which travelled by barge from Clare to Sligo, reached its final destination in Enniscrone in the early hours of this morning.

The plane, which is to be converted for use on a glamping site in Enniscrone, was transported from the barge to a trailer by crane once it was beached on the strand.

It was then driven to the site where David McGowan is developing his Quirky Glamping Nights village.

No, nothing ever happens in Enniscrone. pic.twitter.com/DQUTz3D2dy

Mr McGowan already has a number of old London taxis and a double decker bus ready to be converted into accommodation on the site and is also planning to buy more buses and boats for the venture.

The journey of the aircraft has attracted widespread attention on social media and thousands of people travelled to Enniscrone to watch the plane coming in.

Mr McGowan bought the plane, which was previously owned by Russian airline Transaero, last year for €20,000.

Transporting it back to Sligo has been a major logistical exercise after a transfer by road was ruled out due to its size.

Huge congrats to David McGowan and all involved in getting the 767 to Enniscrone! #PlaneSailing pic.twitter.com/ltJ2lk6T6K 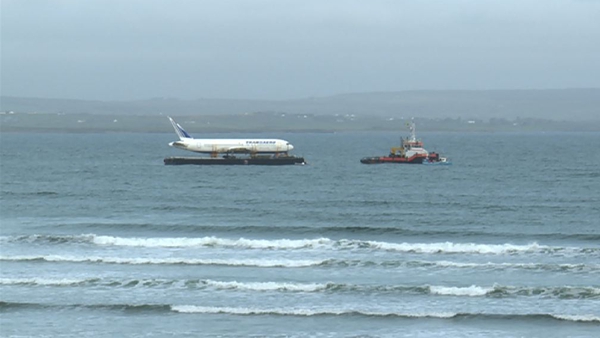 Boeing 767 has been successfully beached in Sligo