A coroner's court has been told how a 12-year-old girl ran for help after she saw her father dive into the sea off Baltimore in west Cork in an attempt to rescue her brother and his girlfriend.

Tourists who raised the alarm said Charlotte Davis Ryan was in shock and trembling and told them she saw her family drowned.

At Clonakilty courthouse, a verdict of accidental death was returned in the cases of 51-year-old Barry St John Ryan, his son Barry Davis Ryan, and Niamh O'Connor, both aged 20, who drowned on 30 June 2015.

Coronor Frank O'Connell said Barry Ryan Snr gave his life to try and save the two others.

Mr O'Connell said Mr Ryan could have made a different decision but he did not and described him as an extremely brave and courageous man - "his actions a testimony to his quality as a man."

In a statement, the now 13-year-old Charlotte told the court that all four of them had gone fishing on rocks below the beacon just after 6pm that day.

Her brother Barry went fishing off a rock, while the other three sat nearby on another rock. He asked if any one of them wanted to have a go and his girlfriend, Ms O'Connor, joined him.

Charlotte said both of them got splashed by a wave.

She said another big wave came and soaked her and her dad, pushing them up against the rocks.

The young couple were swept out to sea and she heard Niamh screaming.

Charlotte said her father took off his coat and told her to keep going up the rocks, but she said she kept looking back.

She saw her dad and Niamh going under but could not see her brother anymore and started to panic.

She met three Welsh tourists who raised the alarm and later they encountered a coast guard who told them they had recovered two bodies.

The court also heard the statement of a tourist from Australia, Sinead O'Sullivan, who was out on a walk with her family.

She said she had seen a girl in the water and there was a seal nearby.

The girl was shouting but the witness did not think anything was wrong.

Her aunt, Siobhan Murphy, told the court how they saw a man stripped to his trunks and get into the water "calmly".

He swam to the girl but she too did not think there was anything "distressed about them". It was only when they returned from their walk that they heard what had happened.

Kieran Cotter, Coxswain of the Baltimore Lifeboat, told how they quickly recovered the bodies of Barry Ryan and Ms O’Connor, and how the body of Barry Davis Ryan was recovered ten days later by divers.

He told the court that in his opinion anyone going rock fishing should wear a buoyancy aid and if they did there would be a reasonable chance of them surviving.

Assistant State Pathologist Dr Margot Bolster told the court that all three had died from acute cardio respiratory failure due to drowning.

Traumatic brain injury with subarachnoid haemorrhage was also a significant factor in the deaths of the young couple.

The coroner extended his deepest sympathies to both families.

The inquest was adjourned temporarily when Mr Ryan’s widow, Ann Davis Ryan, fainted during her daughter’s evidence but resumed after she received medical attention. 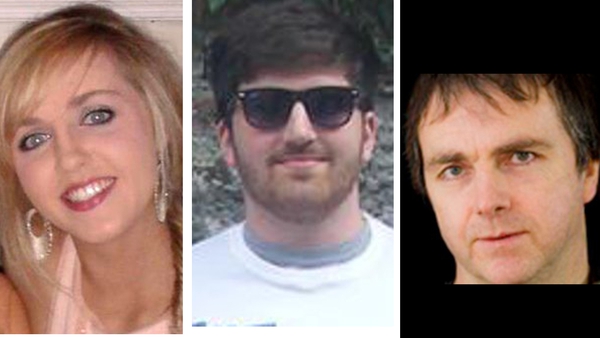 Couple swept out to sea by freak wave, inquest hears