The Garda Ombudsman asked a whistleblower, who has made serious complaints against senior members of the force, to sign a statement saying he would not discuss the allegations with any third parties or the media, RTÉ's This Week has learned.

The whistleblower, a young garda based in Donegal, was told by GSOC that while they could not force him to sign the statement, if he did discuss his allegations with anyone other than GSOC it might "jeopardise" the process.

The request was made at a meeting between the whistleblower and GSOC last month in Galway.

RTÉ's This Week has seen confidential internal GSOC documents which confirm that the Ombudsman did request the garda sign the statement and that he was told there may be negative consequences for the process if he did not comply.

The GSOC document seen by RTÉ was signed by Ombudsman chairperson Ms Justice Mary Ellen Ring and it clearly references a request being made to the garda not to speak to "any third parties or the media".

Independent TD Clare Daly has described the move by GSOC as an effective "gagging order" on gardaí who make protected disclosures.

She said: "I never thought I could still be shocked by the operations of GSOC but I'm deeply troubled by the letter.

"It would give me the impression it's nothing more than an attempt to gag a whistleblower who has spent two years trying to get an investigation [into alleged garda wrongdoing]".

Responding to the request that the garda not speak to "any third parties", Deputy Daly (below) described the correspondence as "utterly bizarre, because the Garda Síochána Act and the Protected Disclosures Act allows gardaí to confide and lawfully confide in members of the Oireachtas.

"Myself and Deputy Mick Wallace have for years been in contact with these people; entirely lawful contact we believe," she said, adding that "this letter appears to be saying: 'don't talk to anyone else [other than GSOC]'".

In addition to members of the Oireacthas, other third parties to whom a protected disclosure can be made under the 2014 Act include an employer, a legal advisor or to a serving government minister if the worker is or was employed in a public body.

The GSOC letter said that it was explained to the garda whistlebelower that any failure to comply with the request not to disclose information to third parties or the media could "jeopardise the investigation". 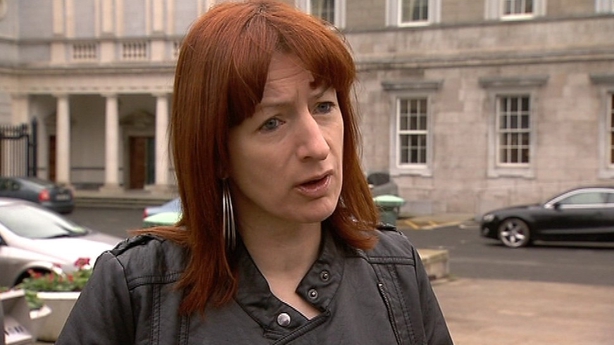 However, she said that GSOC had a statutory obligation to conduct an investigation fully irrespective of any other considerations, such as whether the complainant complied with any non-statutorily binding agreement or not.

The whistleblower has made serious allegations against senior members of the force.

He has alleged that his career was negatively impacted once he arrested a detective garda for a road traffic offence.

He said that he was later subjected to internal investigations and harassment by senior colleagues.

The senior garda against whom he has made the most serious claims, and the garda detective who he arrested, are also the subject of another allegation of wrongdoing by another garda whistleblower.

Both men claim their careers were effectively ruined after they raised concerns with superiors about the conduct of this particular detective.

In a statement, GSOC told RTÉ's This Week that the confidentiality of the process which was created under the Protected Disclosures Act 2014 was there to protect the discloser and the integrity of the investigation into their allegations.

"GSOC will not comment, therefore, on any such cases."

However, the statement added that "in order to conduct an investigation as effectively as possible, in the public interest and in the interest of the complainant and any gardaí being complained of, it is important that the detail of an investigation be kept confidential.

"For example, it may make a nonsense of doing a cautioned interview with a suspect, if the suspect is alerted as to where an investigation is at by the media. Similarly, evidence needs to be collected in an investigation. If people who have that evidence become aware through the media of the detail of the investigation, collecting the evidence may become difficult, if not impossible.

"GSOC has no legal power to coerce people into silence, nor would we ever seek such a power.

"However, in order to discharge our statutory duties as effectively as possible, we believe it is important to remind people involved in investigations that disclosing the details of an investigation while it is ongoing can make it very difficult to conduct it effectively," the statement concluded.