Talks at Government Buildings between Fine Gael, 15 Independent TDs and the two Green Party TDs have adjourned until 8.30am tomorrow.

Green Party leader Eamon Ryan said he would revert to his party, but he believes it is unlikely the Greens will go into government.

He will attend tomorrow's talks with Fine Gael and will meet separately with Fianna Fáil.

All the Independents asked that contact be made with Fianna Fáil as soon as possible.

However, Taoiseach Enda Kenny said he needed an agreement in principle with the Independents first.

He said he was hopeful this could be achieved by Friday, and he would then feel able to go to Fianna Fáil on that basis.

Numerous papers were circulated and discussed on a range of issues at the meeting, including housing, rural development and jobs, and making government more transparent, including opening up the budgetary process.

Proposals were put down on rural schools, regional post offices and airports and creating an Atlantic economic corridor in the west to attract jobs.

Mental health was also discussed, with Independent TD for Clare Dr Michael Harty leading criticism of a document on the issue, with wide agreement that it was not good enough. It is being revised.

The Atlantic economic corridor document includes plans to help develop infrastructure and attract Irish and multinational investment and jobs to the west of Ireland.

It is a first draft for discussion and will be revised. It promises that no rural schools will be closed.

The document also promises an additional €100 million in capital investment for the Wild Atlantic Way and greenways and an extra €10 million for regional airports to help them operate on a standalone commercial basis in the future.

There are also commitments on post offices including electronic payment accounts and to act swiftly on the business development group report.

As previously reported there is also a promise to appoint a new cabinet minister and Department of Rural Affairs, as well as a proposal to deliver high speed broadband to very pub in the country by 2020 and remove the rate of duty for publicans' licenses for premises with an annual turnover of less than €190,000.

Heading into the talks earlier, Independent TD Danny Healy Rae was critical of other TDs and parties who are not participating in the talks to form a government, describing them as "hurlers on the ditch".

His brother Michael Healy Rae also said it was disgraceful that Fine Gael and Fianna Fáil had not yet talked to each other.

The Healy-Raes have criticised "about 40 TDs" including Sinn Féin for not engaging in the talks about forming a govthttps://t.co/jOUAx5xq6D

Minister for Health Leo Varadkar, a senior member of the Fine Gael negotiating team, said his party would intensify and "ramp up" its efforts this week.

He said the current talks were going well, there was good engagement and a lot of common ground but that it was a very diverse group.

He added that he thinks it will be difficult to form a stable government without some sort of arrangement between Fine Gael and Fianna Fáil.

But it was not inevitable that contact be made with Fianna Fáil, he said.

He said he did not think the talks would be concluded quickly but potentially it could be done by next week.

His party colleague Simon Harris, who is also part of the Fine Gael negotiating team, said the party would first see if progress was made with these 17 deputies before contacting other opposition parties.

Fine Gael focusing on talks with Independents before making any approach to "opposition" about forming minority govthttps://t.co/qgTpefewJ2

Although many of the TDs are holding separate talks with Fianna Fáil tomorrow, this week is seen as critical to determine how many will pledge support to Fine Gael when the Dáil returns next week. 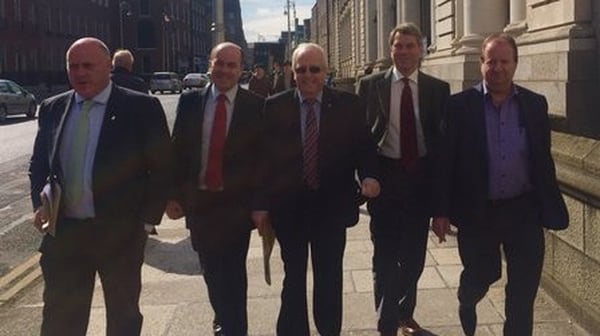