The Director of Housing with Fingal Country Council has said the council has been in contact with the developer of a housing estate in Tyrrelstown with a view to purchasing a number of the houses.

Residents from Cruise Park Drive staged a protest yesterday, saying more than 100 families face losing their homes as the fund that owns the properties seeks to sell 103 houses in the area over four years.

The Tyrrelstown Tenants Action Group wants the Government to step in to save them from eviction.

In the Dáil yesterday, acting Minister for the Environment Alan Kelly indicated talks were taking place between the local authority and the developer but gave no further detail.

Speaking on RTÉ's Morning Ireland, Margaret Geraghty said talks are ongoing between the two parties but as of yet they have not progressed.

Ms Geraghty added negotiations must be allowed to take their course and said it would not be appropriate to go into any further detail at this stage.

She did, however, say the council has capital funding to deliver an ambitious housing programme. 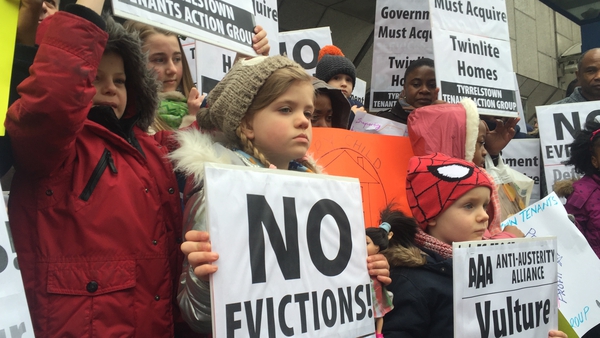