A number of small groups, parties and independents have agreed to take part in round table talks organised by Fine Gael tomorrow.

The Independent Alliance, as well as a group of five rural independents, the Green Party, and TDs Katherine Zappone and Maureen O'Sullivan have agreed to participate in the talks.

The five rural independent TDs earlier had what they described as constructive talks with acting Taosieach Enda Kenny at Government Buildings.

Deputy Denis Naughten said no decision had been made by the group on if they would support any nominations for Taoiseach.

Dr Harty said they were trying to establish trust that a stable government could be formed.

Mr Naughten said the issues they were looking at such as jobs and rural decline and housing were common to all constituencies.

Mr McGrath said the issue of ministries was not discussed and he also ruled out doing any local deals.

In a statement, he said negotiations had lasted nearly two hours and had been "constructive and cordial".

Mr McGrath also said he and the four other TDs will meet with Fianna Fáil's negotiating team this evening.

Speaking on RTÉ's Morning Ireland, Mr Naughten said Fine Gael has momentum because it has extra seats, adding that he believes Fine Gael is more serious than Fianna Fáil about forming a government.

Mr Naughten said they are not closing the door with Fianna Fáil but that they want to move the issue along.

He said the group of Independents are trying to see if they come to some common approach with other Independents and parties to issues such as overcrowding in hospitals and the homelessness crisis.

He said the "merry-go-round" has gone on long enough and that it is time for people to get on with real talks.

Five indepts after talks in govt buildings with Taoiseach but no decision on vote for Taoiseach #rtenews pic.twitter.com/6JqssV9M5G

Meanwhile a new Dáil committee on reform has agreed in principle to examine up to eight areas of possible change, including the size and number of technical groups and introducing family friendly measures such as grouping votes.

The committee chaired by Ceann Comhairle Seán Ó Fearghaíl will bring a draft report for debate to the house when it returns on 6 April.

Deputies will then vote again on nominations for Taoiseach. 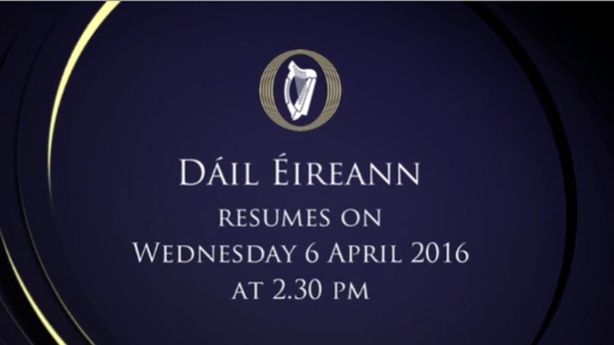