Acting Taoiseach Enda Kenny has held a meeting with US President Barack Obama in Washington.

This is President Obama's last St Patrick's Day in the White House and pending government formation negotiations, it may also be Mr Kenny's last as Taoiseach.

Mr Obama criticised the vicious nature of the current US political cycle and pledged to continue to push for immigration reform while he was still in office.

He was speaking as he attended several engagements with Mr Kenny to mark St Patrick's Day.

Earlier, Mr Kenny told Vice President Joe Biden that Ireland will be able to put together a stable government during the next "short period ahead".

The recent General Election was mentioned several times during speeches from both men.

Mr Biden said that he was surprised at the outcome saying "he did a hell of a job, is still the most popular guy, and he lost".

Mr Biden said Mr Kenny had assured him that it was "going to work out". 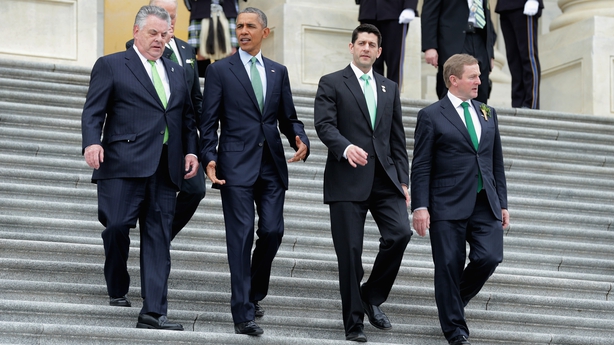 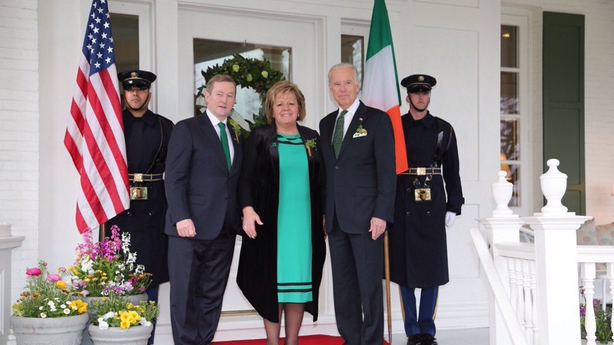 Taoiseach Enda Kenny tonight presented the traditional bowl of shamrock to US president Barack Obama at a ceremony.

The bowl was mouth-blown and hand-cut at the House of Waterford Crystal factory in Ireland.

The piece was designed by Tom Cooke and inspired by the GPO in Dublin.

It features the five themes of the Irish 2016 Centenary Programme - Remembering, Reconciling, Presenting, Imagining and Celebrating  - which are inscribed on the piece.

He also presented him with a pair of cuff links modelled on the buttons of the coat Michael Collins was wearing when he was killed, and a limited-edition, fine-press collection of poetry and art, to celebrate the centenary of the 1916 Rising, published by Stoney Road Press, in association with An Post and Poetry Ireland.

Michelle Obama is receiving a ring designed by Paul Kelly, inspired by the Ring of Kerry, and a hamper of Irish food items.

For Malia and Sasha Obama there are two Newbridge Silver compact mirrors.

Mr Kenny will return to Ireland for a short time tomorrow before travelling to Brussels for a European Council meeting on St Patrick's Day. 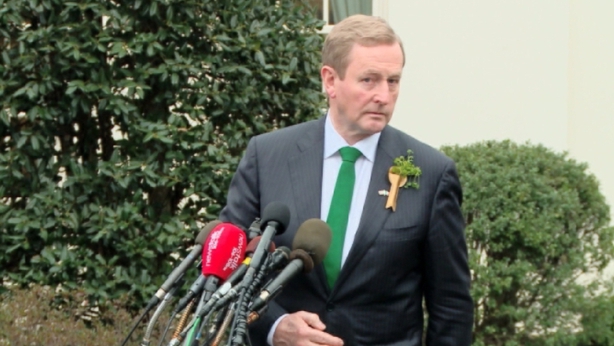 Wallace, Daly not contacted by FF or FG for govt talks

Fine Gael working on 'set of priorities' for talks

Speaking to reporters after visiting the Oval Office, Mr Kenny said Fine Gael is talking to like-minded parties and individuals on government formation and is working on drawing-up a set of priorities.

"Some of that comes from our own programme, some of it comes from the parties and the alliances that we’ve been talking to.

"And some of it clearly comes from the concerns raised by people during the course of the election, like housing and homelessness, health issues and so on."

He added: "We expect to have that finalised next week and that gives us really the basis for negotiations and for discussions about putting a government together."

Kenny says Fine Gael hopes to have a 'set of priorities' to use as a basis for govt negotiations ready by next weekhttps://t.co/YoSFq8lJJA 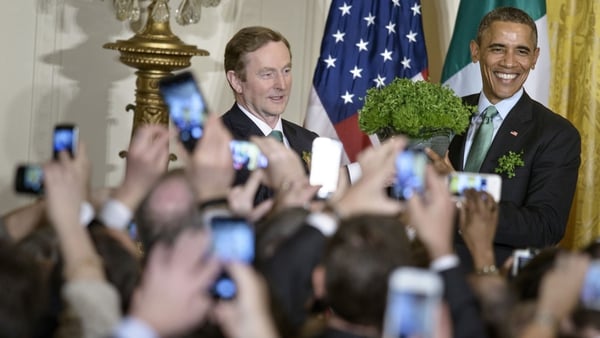