Nobel prize-winning economist Joseph Stiglitz has challenged the Government's narrative on economic growth and criticised the European Central Bank for what he called "forcing" the Irish State to take on private debt following the economic collapse.

Sharing a panel with Taoiseach Enda Kenny during a debate at the World Economic Forum in Davos, Mr Stiglitz said that in the years since the financial crisis hit in 2008 Ireland had, overall, low or no growth.

"Every downturn eventually comes to an end.  The real question in judging it is how long is the downturn, how deep, how many broken bones in the process.

Mr Stiglitz acknowledged that Ireland had done "best" among the countries badly affected by the euro crisis.

"I wouldn't call it victory yet," he said.

"You're turning the corner which is great, and I've got to commend you for that. But there's still - you know, you're looking for a lost decade in terms of when people say where was the economy in 2008 and 2018, and they'll say there was no growth or very low growth over that interval.

"Among the countries that had austerity, you did the best."

The Taoiseach countered: "We're not declaring any victory here. We're reporting progress and we're reporting the management of that progress for the future."

He said: "We've set out a longer term economic strategy here, to manage this for the future, to create a further 200,000 jobs by 2020, and to bring back 70,000 people...to a country where they can get a good job, with a lowering rate of personal taxation."

Mr Stiglitz said the Irish recovery had to be put in perspective with other countries where there were "depressions".

He said that unemployment had only been lowered in Greece and Spain because workers had emigrated.

"The splitting of families and what is has done in Spain and Greece is a disaster."

Mr Stiglitz added: "The question I always ask is, was there an alternative policy, and would you have been better off if the ECB had not forced you to take on some of the debt from the private on to the public?

"In my view, obviously the direct answer to that is, you would have been better off if you didn't have that debt.

"You would have been better off if you had had the assistance for a growth police rather than an austerity policy."

"Given the restraints you did well”, he added

He said it also includes learning "from the lessons of the past and not to have a boom and bust situation which is why Government's plan is to control the rate of public spending".

Separately, Mr Kenny rejected the suggestion that Budget 2016 was a "tax Bribe".

Speaking on CNBC, the Taoiseach said the indications are that the corporate tax revenues will continue at current levels and the the 12.5% rate will not change.

He said the new knowledge development box at 6.5% will be attractive to international companies.

Asked if Donald Trump being elected US president, with his promise to bring US companies and their revenues back to the US, would damage Irish tax model - Mr Kenny said it is up to American people who to elect and up to the US government to deal with its own tax system.

He said the Government will work with whoever is elected. 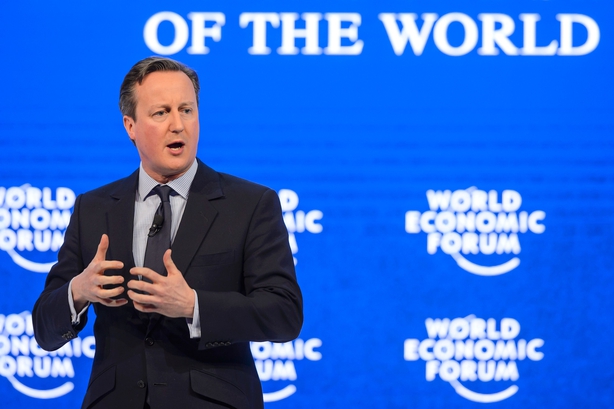 British Prime Minister David Cameron is also in Davos to set out an economic case for Britain to remain in the EU, provided he gets the reforms he is seeking.

Mr Cameron is expected to urge business leaders to make a strong case to remain in the EU, knowing that their support – albeit last minute – was vital to turning around the referendum on Scottish Independence.