A former Fianna Fáil councillor who featured in the RTÉ Investigations Unit programme on standards in public office has said he is considering legal action against RTÉ.

Speaking to Ocean FM, Joe Queenan said he will make a decision once he has all of the facts and information which he has requested through the Freedom of Information Act.

Mr Queenan said he felt entrapped by the reporter, however, he apologised for his actions.

He said: "As I said I'm sorry. If I could turn the clock back there's things I said at that meeting I never would have said. I went there for a casual conversation."

Mr Queenan said that he was "doing absolutely nothing wrong" and what was happening was done "every day of the week".

The councillor said he was "absolutely devastated and gutted" by what had happened and it was a nightmare situation for him.

In response to comments by Mr Queenan, a spokesperson for RTÉ said the programme makers acted with integrity at all times and the broadcaster's legal affairs department "scrutinised the conversations carefully".

RTÉ said that both legally and editorially it is entirely satisfied that that it acted appropriately and in the public interest.

In a statement, RTÉ added that: "This programme performs an important public service in revealing the conflicts of interest that some councillors are willing to entertain in the performance of their public duties.

"The extracts shown on the programme were a fair reflection of the contents of the meetings.

"Two weeks before the programme, each of the three councillors were offered the opportunity to view the footage and read the transcript of what took place at the meeting.

"Only one councillor availed of the opportunity to view the material.

"RTÉ offered each of the three councillors the opportunity to do an interview for our programme which they each declined.

"Any response statements received were fairly summarised in the documentary. RTÉ fully stands over the investigation and the production of our programme." 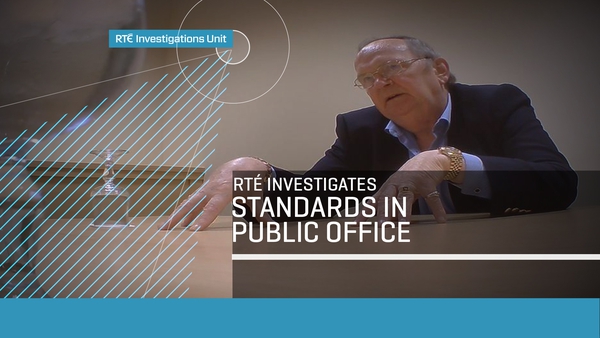