Anti-Syrian refugee protesters who staged a demonstration in Belfast were significantly outnumbered by people who turned up to support those fleeing the war-torn country.

Around 30 people took part in the "Say no to refugees" picket outside City Hall this morning.

An adjacent counter-demonstration, whose main message was one of welcome for Syrians arriving in Northern Ireland later this month, was attended by around 200 people.

There was a major security presence in front of City Hall as police stood between the opposing groups, but there was no trouble. 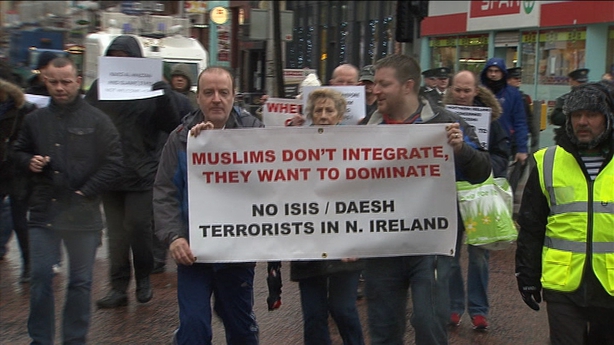 A group calling itself the Protestant Coalition organised the anti-refugee demo.

A group named Belfast Anti-Fascists was involved in the counter-demonstration called "Refugees welcome, bigots not".

Around 50 Syrians will arrive in Northern Ireland on 15 December as part of the UK-wide resettlement programme.