British Prime Minister David Cameron is described as "threatening recklessly" the Northern Ireland peace process when he was in opposition in Westminster, in the latest batch of emails from Hillary Clinton's private server released by the US Department of State.

The comment is made among a series of emails in 2010 from 25 to 26 January between the former US Secretary of State and current Democratic presidential candidate front-runner Hillary Clinton, and her advisor Sydney Blumenthal discussing the latest Northern Ireland negotiations of the time.

Mr Blumenthal informs the then Secretary that he had received a call from then Northern Ireland Secretary Shaun Woodward to tell him that the negotiations between the then British PM Gordon Brown and then Taoiseach Brian Cowen had broken up.

He reports that Mr Cameron "has intervened, threatening recklessly to destroy a generation of work, in order potentially to gain marginal seats in NI in case of a hung parliament", adding that "secret meetings" had been held at a country house between the Northern Ireland Unionists and the Tories.

In a later email, Mr Blumenthal again queries the commitment of  Mr Cameron, who was leader of the opposition facing into a general election.

Mr Blumenthal says "it is unclear what is going on with Cameron. Is he actually pushing for the agreement or not? If he is, does he have any influence? Either Cameron is purposefully not being strong with Empey or he is being spurned, making calls.

"If he is not really pressuring Empey, it would be out of a desperate and vain attempt to grab a parliamentary seat in the case of a hung parliament – a seat that is out of his grasp – the Sylvia Hermon seat".

Reg Empey was the leader of the Ulster Unionist Party at the time.

There are 7,800 pages emails in the current batch just released last night by the US State Department, in line with a court order to do so. Many of them are redacted.  Of those released now, dozens of emails refer to Ireland in some way.

Mostly the emails comprise of news alerts and Irish and British media reportage of the progression of various rounds of talks in Northern Ireland.

There is also significant correspondence relating to the flags protests in December 2012, which occurred just before Secretary Clinton was scheduled to visit Belfast.

In addition to the concerns about Mr Cameron's intervention in 2010 ahead of the British general election, there is also a discussion about the actions of Mr Empey, including confusion about how he voted on various matters during the negotiations.

Mrs Clinton goes on to joke in an email to Mr Blumenthal and another advisor Jake Sullivan that maybe Mr Empey is "probably seeing glass half empey".

The emails also reveal that Mrs Clinton used the private server to send messages relating to the attack on the Benghazi compound in 2012.

In addition to emails relating to operational matters, there is correspondence whereby she asks assistance from an advisor on how she can find the right channel to watch 'Homeland'. 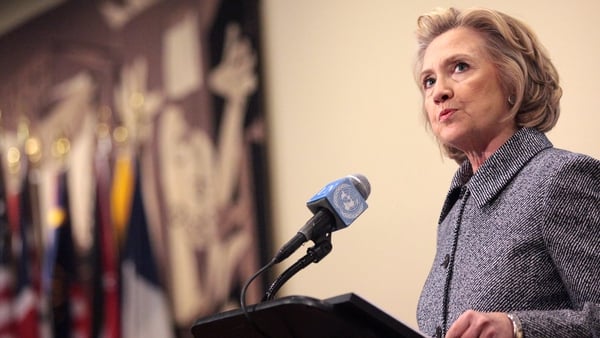 Hillary Clinton says she should have used government email address