Mr Kenny was addressing the UN summit on climate change in Paris this evening.

Negotiators from 195 countries are trying to reach a deal aimed at reducing global carbon emissions.

He said that we will be one of the few countries to have that.

The Taoiseach said he will also say that Ireland will continue to increase the public finance for climate change, to contribute to the green development fund from 2016 onwards, and to increase the amount we give for the least developed countries.

He will also point out that Ireland wants, and will participate in, achieving climate goals that are fair and sustainable.

Mr Kenny said that Ireland had lost a decade of investment that cannot be recovered.

He said he will tell the leaders that Ireland faces a challenge it has an economic engine to enable it to change structures and to continue to invest in research and innovation for more sustainable ways of doing agriculture.

Ireland does not want to see a situation where it becomes limited terms of what it can produce only to find that food we would have produced is being sourced in other countries with inferior standards and higher carbon emissions levels, he said.

Mr Kenny said that these are matters for detailed discussions over the next couple of weeks with officials who will continue with debates after the roadmap has been sent out and signed off on by the global leaders in Paris this evening.

When it was put to him that his approach suggested that he is looking for wriggle room in relation to Ireland's climate change commitments he said the European Commission climate targets for 2020 overestimated what agriculture in Ireland could actually deliver.

The Taoiseach said Ireland wants an understanding that we are serious about achieving fair and sustainable climate targets but that we need space to be enabled to deliver on that.

He said that in future years Ireland will ramp up its contribution to the green climate fund for which the Government is contributing €2 million next year.

Earlier, US President Barack Obama said the global climate summit in Paris is a "turning point" in the fight against global warming.

Barack Obama tells the Paris climate summit that the US embraces its responsibility to address climate change https://t.co/sf4PXfqmdg

Speaking at the summit, Mr Obama said "this is the moment we finally determined we would save our planet, is the fact that out nations share a sense of urgency about this challenge and a growing realisation that it is within out power to do something about it."

World leaders launched an ambitious attempt to hold back the earth's rising temperatures, with French President Francois Hollande saying the world was at "breaking point" in the fight against global warming. 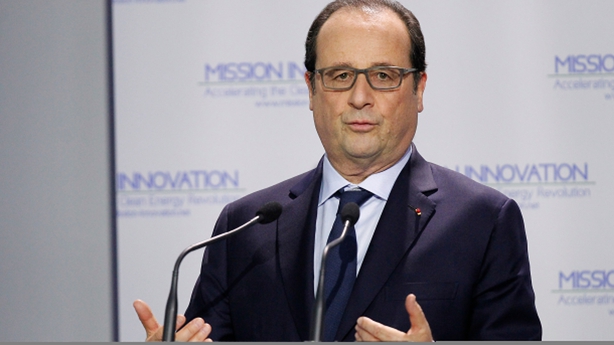 Some 150 heads of state and government, including urged each other to find common cause in two weeks of bargaining to steer the global economy away from its dependence on fossil fuels.

They arrived at United Nations climate change talks accompanied by high expectations and armed with promises to act.

Mr Obama said that India had to be able to grow and fight poverty, while Indian Prime Minister Narendra Modi pledged to ensure development would be coupled with environmental protection.

One of the stumbling blocks to getting an inclusive agreement to fight climate change has been the United States' reluctance to accept that some countries should be obliged to do more than others, while nations such as India have objected to restrictions on their development.

After talks with Mr Modi on the sidelines of a UN summit on climate change in Paris, Mr Obama told reporters he and the Indian Prime Minister had agreed climate change was an urgent threat and also that India also had to be able to grow.

In return, Mr Modi said he would work "to ensure that development and environmental protection go hand in hand".

After decades of struggling negotiations and the failure of a summit in Copenhagen in 2009, some form of landmark agreement appears all but assured by mid-December.

Warnings from climate scientists, demands from activists and exhortations from religious leaders like Pope Francis have coupled with major advances in cleaner energy sources like solar power to raise pressure for cuts in carbon emissions held responsible for warming the planet.

Most scientists say failure to agree on strong measures in Paris would doom the world to ever-hotter average temperatures, bringing with them deadlier storms, more frequent droughts and rising sea levels as polar ice caps melt.

Facing such alarming projections, the leaders of nations responsible for about 90% of the world's greenhouse gas emissions have come bearing pledges to reduce their national carbon output, through different measures at different rates.

Over the next two weeks, negotiators will hammer out the strongest international climate pact yet.

The deal will mark a momentous step in the often frustrating quest for global agreement, albeit one that - on its own - will not be enough to prevent the earth's temperatures from rising past a damaging threshold.