French police have released a photo of the third of three suicide bombers who blew themselves up outside France's national stadium during the 13 November Paris attacks.

Investigators had said on Friday that the assailant turned up among refugees on the Greek island of Leros on 3 October, along with another attacker whose photo has been released but who remains unidentified.

Only one of the three assailants at the Stade de France, north of Paris, has been identified so far. He has been named as French national Bilal Hadfi, 20, who lived in Belgium.

The man in the photo released today presented a Syrian passport in the name of Mohammad al-Mahmod to Greek authorities, a source close to the investigation said.

He and the other attacker who landed on Leros then took a ferry to the Greek port of Piraeus on 8 October before joining the migrant flow toward Serbia.

They were among seven gunmen and suicide bombers in the wave of coordinated attacks in Paris that left 130 dead and around 350 wounded.

Investigators are still hunting for Salah Abdeslam, suspected of fleeing the scene and heading to Belgium.

One person was killed when the three suicide bombers blew themselves up near the Stade de France the night of the attacks claimed by the so-called Islamic State group, which also targeted the Bataclan concert hall and several bars and restaurants in an upmarket part of eastern Paris. 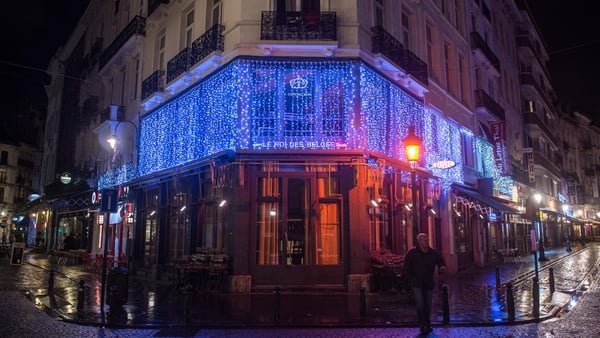 Brussels in lockdown after terror alert upgraded to highest level