Croatia allowed thousand of migrants who were stuck at the border with Serbia to cross into its territory late this afternoon, having earlier dramatically slowed the number of crossings.

"Everybody who was here has gone through," an AFP photographer at the Berkasovo crossing, where between 2,000 and 3,000 people had been stuck waiting to cross in cold and wet conditions.

Czech volunteer Jan Pinos at the scene also told AFP that Croatian police had "opened the gate and let all refugees who where there in".

Since yesterday, the numbers being allowed into Croatia on their journey to northern Europe had sharply slowed after Slovenia let limited numbers cross into its territory, causing delays further down the migrant trail.

UNHCR, the UN refugee agency estimated earlier today that more than 10,000 refugees and migrants were stranded in Serbia, as Croatia allowed only a trickle across. 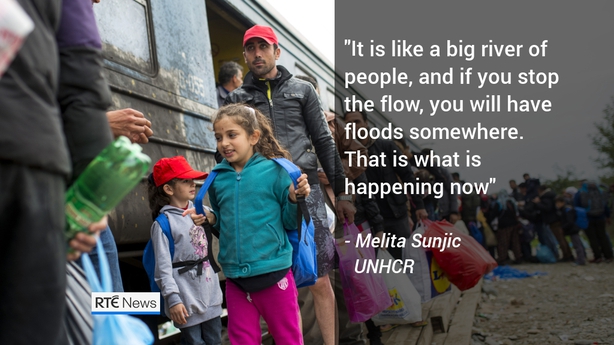 About 3,000 had massed at the Serbian border in heavy rain, causing alarm among volunteers who said humanitarian assistance and food was scarce.

It was not immediately clear why Croatia suddenly permitted the mass entry.

Before the weekend, migrants had been passing from Croatia into Hungary, but Hungarian authorities shut off that border crossing with razor wire early on Saturday, so the migrants were redirected through Slovenia.