President Michael D Higgins has criticised the current economic theory in play in the European Union in a speech to New York University.

Delivering a keynote address on the final night of his five-day trip to the United States, President Higgins said a new way of thinking was required to protect the future of the EU.

He said society was living through "a new form of capitalism", that had a global reach but which is not accountable to democratic institutions.

He added that while austerity may be the name given to people paying the price of national debt costs, it was hiding the fact that citizens were being controlled by forces that were not democratic, and that wealth was being transferred to private creditors.

President Higgins said democracy had been ceded to these economic institutions that were not democratic and cited the example of how one waits on rating agencies' in order to discover what the future held.

He said the "glaring inequalities of the globe must be recognised as the threat they constitute to democracy everywhere".

He said these inequalities had implications for health, housing, work, participation and life itself in all of Ireland.

The President was speaking at the New York University School of Law where he had been invited to deliver the 11th Annual Emile Noël Lecture, a prestigious speaking engagement named after a long-serving Secretary General of the European Commission.

President Higgins' speech - 'The European Union - Towards a Discourse of Reconnection, Renewal and Hope' - was delivered to a packed crowd, following which he conducted a brief questions and answers session with some of the NYU law faculty.

The President said that EU heads of state had the very "onerous work" of teasing out various policy options, but their work would not address the question of Europe's legitimacy unless they recognised the "dominant influences of the contemporary forms of captialism".

President Higgins also told the several hundred strong crowd that this was a defining moment in the EU's history and that the European community was facing political, institutional, intellectual and moral questions.

He said there was a broad agreement that new thinking was needed that would address the human challenges of social inclusion but it had not come yet.

He also added that "fear and tension" were the consequences of governments having to cut budgets, and that these cuts fell most heavily on the poor.

In calling for those in positions of power to have a sense of economic literacy, he also praised the work of the European Union to date, highlighting how useful membership had been to Ireland. 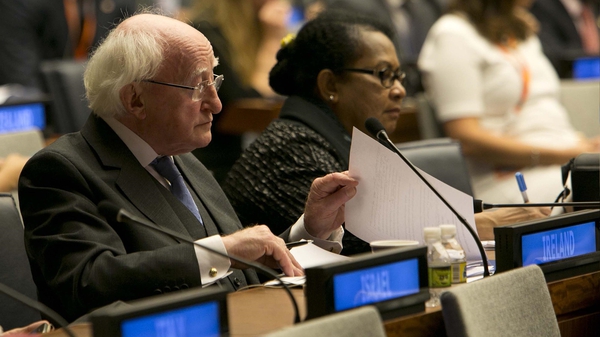