Opposition parties have accused the Government of "auction politics" before the General Election, after the announcement today of €27bn funding over five years on capital projects.

Fianna Fáil described the spending proposals as a "phoney plan" predicated on private funds, while Sinn Féin said they contained nothing new.

The Government today announced its funding on capital projects from 2016 to 2021.

Minister for Public Expenditure and Reform Brendan Howlin said that €42bn will be invested in total – with an additional €14.5bn coming from commercial semi-states and €500m from public-private partnerships.

The Government said the plan will see the creation of 45,000 construction jobs, a series of new road projects, and school programmes, as well as a new Metro North rail line.

A rail link from Dublin city centre to Dublin Airport and on to Swords forms the centre piece of the transport plan.

The Government said it expects that the Metro North line will be in operation by 2026/2027.

It also said the first phase of a multi-phase DART expansion programme will begin, with the extension of the DART line to Balbriggan and with design and planning to progress for expansion of DART services to Maynooth in the west and Hazelhatch in the southwest.

The DART Underground Project will also be redesigned to provide a lower cost technical solution, whilst retaining the required rail connectivity. 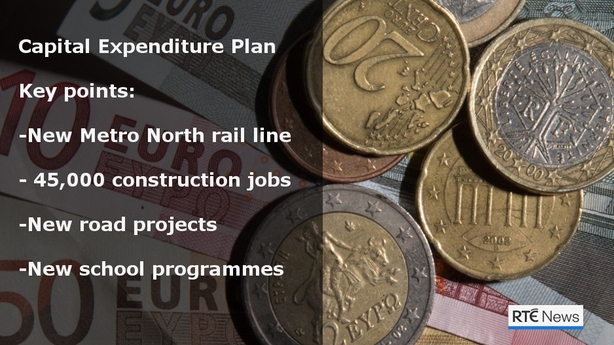 Other key areas of the Capital Plan include education, health, housing and flood protection.

There will also be funding to refurbish and upgrade State-run nursing homes.

There will be funding too for garda stations, the garda fleet and ICT systems and €1bn is promised to support business and jobs.

The social housing plan was previously announced and additional funding has been provided for 2021.

A mid-term review of the plan will take place in 2017 and new rules for public-private partnerships will also be announced.

Minister Howlin has described the Capital Plan as a balanced set of proposals, while keeping the economy on track.

Speaking on RTÉ's Six One News, he said that the Government has spent the last number of years putting the economy in shape and it can now plan with certainty.

The minister said the costings will be transparent and he defended the proposed plan for the completion of the revised metro rail link.

He said that planning is separate to Government and that all of the projects are subject to the planning process.

The Government will not spend more that it can afford, he said, and the projects will meet the known bottlenecks in the economy; "the real issues for a functioning economy to thrive".

At the launch of the spending programme at Heuston Station, Tánaiste Joan Burton said the Connolly to Maynooth line will be upgraded to full DART service; the Phoenix Park Tunnel will be upgraded and opened to commuter trains in 2016 and the Cross City Luas to Broombridge in Cabra will come on stream in 2017.

She said there will be significant funding for new and replacement buses and further upgrading of Quality Bus Corridors and road maintenance.

Ms Burton said the plan will make an additional €100m available to fund the relocation of the remaining two Dublin maternity hospitals - the Coombe to St James's, and the Rotunda to Connolly Hospital, Blanchardstown.

Speaking on RTÉ's Drivetime Minister for Transport Paschal Donohoe said the Government would do all it could to fast-track the completion of the revised metro rail line, adding that it takes time to deliver large scale projects.

The minister said the rail link will carry 10,000 passengers per hour and for a project of that scale, the planning and tendering process alone, will take 4-5 years.

He also said the Government is looking to deliver projects while also maintaining economic stability.

Minister for the Arts, Heritage and Culture Heather Humphreys also announced a €300m capital investment package for heritage and culture.

€70 million of this will be spent on the development of arts and cultural infrastructure including funding for our National Cultural Institutions.

€30.8 million is being given to the Ireland 2016 Centenary Programme, which includes the visitor and commemorative centres at the GPO, Moore Street and the new Tenement Museum.

Earlier, Taoiseach Enda Kenny said that the new Capital Plan would contain something for every region and was an attempt to address priorities in a whole range of sectors.

Speaking on his way into this morning's Cabinet meeting, Mr Kenny added that the Government "couldn't do everything in a capital plan".

€275 million has been allocated for the initial rollout of the National Broadband Plan.

The funding is said to be sufficient to provide the "initial stimulus" for delivery of the scheme, which envisages every premises in the country getting high speed broadband access by 2020.

The Government will not speculate about how much it thinks the current plan will cost to roll out, as it believes the figure is commercially sensitive.

But Minister for Communications, Energy and Natural Resources Alex White said the €275 million did not represent the full cost of delivering the plan.

There is also further investment in tourism initiatives of "sufficient scale to stand out in the international marketplace", including the development of visitor attractions such as the Wild Atlantic Way and Ireland's Ancient East.

Under the Capital Plan, funding of almost €3bn will be provided in support of the Social Housing Strategy 2020.

This aims to increase the supply of social housing by up to 35,000 units and contribute significantly to meeting the housing needs of households on the housing list.

The plan also provides €3.8bn in direct funding for investment in primary, secondary and third level education facilities, including the upgrade and extension of existing schools and the provision of new buildings.

A programme of replacing existing pre-fab accommodation with permanent classrooms and facilities will also start.

In the third level sector, the Capital Plan is committing an extra €110m for facilities in the Higher Education sector.

This is in addition to the €40m already committed to the Grangegorman DIT project in Dublin.

No timings given for health projects

€3bn has been pledged for health projects under the Capital Plan including the relocation of the Rotunda Hospital to Blanchardstown.

The funding is allocated over six years from 2016 to 2021. However, no timings have been given for projects.

Minister for Health Leo Varadkar said there was no exact timeline and everything was subject to planning permission.

The timing of today's Capital Plan is worth noting from a political perspective – it is just two weeks from the Budget and comes ahead of the General Election.

Opposition says plan is 'not ambitious'

Fianna Fáil's Sean Fleming said: "In this plan, each of those three key items [housing, broadband and the children’s hospital] are dependant on funding from the private sector.

"So, the Government is including in its plan but washing its own hands of its ability to deliver this.

"Really, they are saying, here are our list of aspirations. We are hoping that somebody, somewhere in the private sector, here or abroad will come up with the money to make these plans a reality.

"It’s a phoney plan. The people of Ireland will see through it."

Sinn Féin's Mary Lou McDonald said it was not a hugely ambitious plan.

She added: "It contains many things that have been promised for many years - almost the things of mythology at this stage; the children's hospital, for example, a rail link to the airport which was promised some 11 years ago, and so on."

Independent TD Finian McGrath said there was a need to be wary of "auction politics".

"The €650m children's hospital was announced before and was supposed to be built in 2016, yet not one block has been laid yet," he said.

"It looks far more like a pre-election list of items that are one for every one in the audience," she said.

Renua leader Lucinda Creighton described the plan as ill-thought out and sporadic.

Speaking on RTÉ's Drivetime, she said she thinks a rail link to the airport is overdue, but said she would not slash the national broadband plan, saying that only €275m is being spent on it.

She said: "We've heard all of these announcements before, but they haven't been matched with political will or funding."

Ms Creighton said the process of deciding on projects is important in a democracy and that it needs to be transparent.