A murder investigation is under way after the body of a 53-year-old taxi driver was found in the Kilcurry area of Dundalk in Co Louth.

The man, who has been named Martin Mulligan, was attacked and stabbed a number of times.

His body was found at around 3.15am by a passer-by.

He was pronounced dead at the scene at Carn More/Kilcurry, which was preserved for a technical examination.

Gardaí are trying to establish a motive for what appears to be a random attack.

They say they are following a number of lines of inquiry and looking at all possible motives, including robbery and a dispute over a fare.

They have now begun a murder inquiry and are also liaising with the PSNI in relation to any inquires that may need to be conducted in Northern Ireland.

However, they say they are not investigating a subversive link. 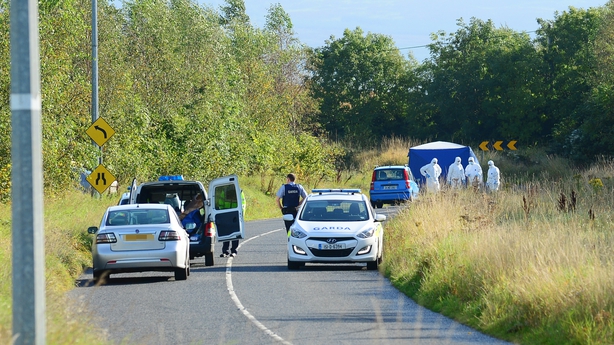 Mr Mulligan, a father-of-two, was from Lower Point Road in Dundalk and was a well-known independent taxi driver who had strong links to his local GAA club, which he once played for.

Gardaí confirmed that Mr Martin had been working last night.

His silver Skoda Octavia, with the registration 07 LH 5599 and with a taxi roof sign, was found a short distance from where his body was discovered on the road to Forkhill in south Armagh, close to the border.

Gardaí say they have been in contact with the PSNI but are not investigating a subversive link but said they are following a number of lines of inquiry. Family members visited the scene this morning.

Deputy State Pathologist Dr Michael Curtis carried out a preliminary examination of Mr Mulligan's body at the scene before it was removed for a post-mortem examination to be carried out at Our Lady of Lourdes Hospital in Drogheda.

Two cars, including the taxi, were also taken from the scene for further forensic tests.

Gardaí are appealing for anyone with information or who may have been in Mr Mulligan's taxi last night or were in the Carn More/Kilcurry area between 1am and 3.30am to contact Dundalk Garda Station on 042-9388400, the Garda Confidential Line 1800-666-111 or any garda station.

Gardaí investigating the death of a 53-year-old man in Co Louth have appealed for witnesses to contact them https://t.co/n6BsqzvuLF