ASTI members have rejected junior cycle reforms while TUI members have voted in favour of the proposed changes by the Department of Education.

Members of the Association of Secondary Teachers Ireland voted 55% against and 45% in favour of the proposals.

It constitutes a major setback to the Government plans for the reforms.

The union had issued no recommendation to members either to accept or reject the proposals.

Meanwhile, the Teachers Union of Ireland has accepted the proposals.

Plans by former minister for education Ruairi Quinn to introduce school-based assessment for the Junior Certificate triggered a major battle with the teachers' unions.

The unions favoured independent State certification and adamantly opposed the idea of teachers having to assess their own students.

The ASTI leadership did not issue a recommendation either for or against.

However, today's ballot result of 55-45% shows the enduring depth of the antipathy among the 18,000 strong ASTI.

A second ASTI ballot has backed industrial action up to and including strike action by a margin of 70% in favour, 30% against.

The ballot was to give a renewed mandate for industrial action in the event that members voted to reject the Junior Cycle reforms.

There has been ongoing low level industrial action for some time involving non-cooperation with implementation of the reforms.

The ASTI standing committee will meet tomorrow to consider the union's next move.

Commenting after the results Minister for Education Jan O'Sullivan said she welcomed the "strong endorsement" for the agreed programme for reform by the Teachers' Union of Ireland.

"However, the decision by 55% of ASTI members who voted to reject the agreed proposals is deeply disappointing.

"That said, I note that the ASTI intends to engage with its members in relation to outstanding concerns.

"Over the coming period I will consult with other education stakeholders, including students, parents and management bodies.

"It is unfortunate that in the long negotiation on junior cycle reform that their [the students] voice has often been lost in the debate.  Their interests will be to the forefront of my thinking on the way forward in implementing junior cycle reform in the coming weeks", she said.

Speaking on RTÉ’s News at One, ASTI Secretary General Pat King said his members had rejected the proposals for two main reasons.

“The second big problem and the overriding problem is, over the past five years we've seen an increase in the levels of distrust in the State, in Government, in the department, and I think that's coming home to roost now."

However, he said believed the matter could still be resolved to everyone's satisfaction.

"We now have to engage again, engage further and bring this matter over the line finally and I still believe and I have to believe that this matter can be resolved to everyone's satisfaction."

He said the ASTI would continue with the current low-level industrial action, involving non-attendance of training events related to the new curriculum but said he could rule out an escalation of industrial action in the future.

Speaking on RTÉ's Six One news Minister for Education, Jan O'Sullivan, said she is "absolutely determined" to proceed with plans to implement Junior Cycle reforms.

The minister said she had signed 'a good agreement' with union leaders, following nine months of negotiation.

She said she was "very pleased" that the TUI had voted to endorse the reforms and that she hopes the ASTI would reflect on the result of the ballot, and address any issues of concern to members.

Speaking earlier today the minister said she wanted to reassure teachers and parents that resources, training and freeing up of hours to up skill teachers were negotiated at length.

She says she is unsure what the union means by having “issues of mistrust”. Minister O’Sullivan said teachers balloted on very specific proposals which were nothing to do with trust.

However she said she would be willing to provide further clarification where needed.

Minister O'Sullivan said it was the democratic right of ASTI to reject junior cycle reforms. However she stressed that the union's leadership signed up to these thoroughly negotiated proposals.

She said any issues of understanding was therefore the responsibility of the executive to clarify to its members.

However the minister said she was open to further consultation and clarification where necessary. 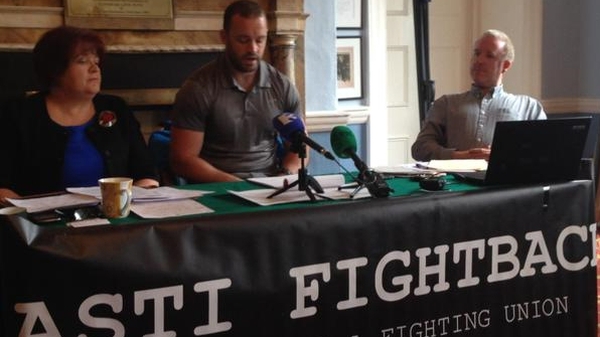