Pope Francis has praised the "efforts and sacrifices" made by Cuba's Catholic Church to work on the island amid a delicate period of transition, scarce resources and a history of tensions with the communist regime.

"I know the efforts and the sacrifices being made by the Church in Cuba to bring Christ's word and presence to all, even in the most remote areas," he said at an open-air mass in the eastern city of Holguin.

It was his second stop on an eight-day, six-city tour that will also take him to the United States.

He particularly praised the "mission houses" in remote areas that he said "given the shortage of churches and priests, provide for many people a place for prayer, for listening to the word of God, for catechesis and community life."

Cuba's Church has slowly gained a prominent role in social welfare programmes on the island after years of hostilities with former leader Fidel Castro's regime, which was officially atheist for more than three decades.

It has also taken on the part of mediator with Castro's brother and successor Raul, who took power in 2006, as he undertakes tentative reforms.

But the Church nevertheless faces numerous struggles in Cuba.

It struggles to recruit clergy in a country where only 10% of the population describes itself as Catholic.

Half the island's priests are foreigners.

The Church also relies heavily on donations from abroad to do its work in the deeply impoverished country.

A crowd of tens of thousands braved the tropical heat to pack the square where Francis gave mass in Holguin, the fourth-largest city in Cuba and capital of the Castro brothers' home region.

The pope, who arrived in Cuba Saturday, will also travel to Santiago de Cuba, then depart tomorrow for a high-profile visit to the United States. 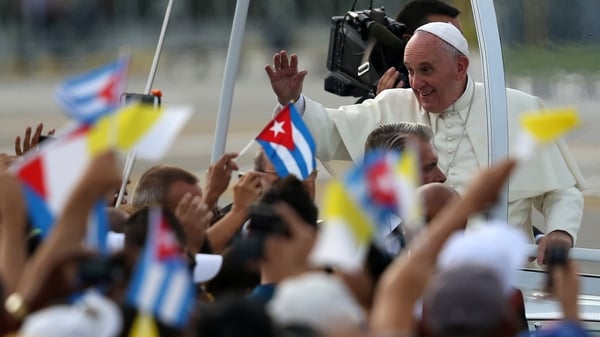