Minister for Foreign Affairs Charlie Flanagan has described the situation in Northern Ireland as "a critical moment for politics."

Addressing the Annual Reconciliation Networking Forum in Dublin, Mr Flanagan said he is determined that a resolution is found.

He said just over a week ago, the British and Irish governments announced a fresh round of intensive talks with a view towards finding a way through the issues of trust and confidence.

He said those issues arose from a legacy of paramilitary activity, as well as the ongoing political impasse with regard to the full implementation of the wide-ranging Stormont House Agreement.

He said these issues are complex and difficult and affect all communities.

Earlier, the British government said "serious consideration" needs to be given to establishing a new body to monitor paramilitarism in Northern Ireland.

Secretary of State Theresa Villiers outlined the potential of a mechanism such as the Independent Monitoring Commission, which assessed the status of paramilitary structures during the peace process.

She was updating the House of Commons on the political crisis at Stormont sparked by a murder linked to the IRA.

Prior to addressing parliament, unionist politicians had stressed the importance of her statement in determining whether they take part in cross-party talks to save power-sharing.

The Democratic Unionists and Ulster Unionists have indicated their presence in any round-table negotiations would depend on Ms Villiers taking definitive action against paramilitarism first.

However, Sinn Féin has insisted there can be no preconditions attached to the process.

Ms Villiers told MPs the political situation is "very grave", and relations between the Northern Ireland parties have "almost completely broken down".

"The government is clear that paramilitary organisations have no place in a democratic society," she told parliament.

"Serious consideration needs to be given whether the time is right to re-establish a body along the line of the Independent Monitoring Commission," she said.

"We all need to work together to find a way to bring an end to this continued blight on Northern Ireland's society."

Ms Villiers said no one wanted to wind back the clock and return to direct rule from Westminster.

Police have said current members of the IRA were involved in shooting the 53-year-old father of nine in a suspected revenge attack for the murder of former IRA commander Gerard 'Jock' Davison in Belfast three months earlier.

The disclosures about the IRA have heaped pressure on Sinn Féin to explain why the police assess that the supposedly defunct paramilitary organisation is still in existence.

Sinn Féin insists the IRA has gone away and has accused the two unionist parties of contriving a crisis for electoral gain.

Ms Villiers told the Commons the two "brutal" murders had brought into "sharp focus" the problems around the continued existence of paramilitary organisations.

"The government is clear that paramilitary organisations have no place in a democratic society," she said.

"They were never justified in the past, they are not justified now, and we all need to work together to find a way to bring to an end this continuing blight on Northern Ireland society.

"The government is working with the parties on how to achieve that goal.

"For example, serious consideration needs to be given to whether the time is right to re-establish a body along the lines of the Independent Monitoring Commission.

"The remit the parties might wish to give to such a body is likely to be different from those addressed by the original IMC, reflecting changed circumstances.

"But there might well be scope for such a body to play a part in providing greater community confidence and repairing working relationships within the Executive.

"The government will also actively consider whether there is more that we can do to support efforts to tackle organised crime and cross-border crime in Northern Ireland."

Ms Villiers said the British government would continue to hear representations from the region's politicians in the days ahead to "ensure all parties can engage" in the talks process.

In response, DUP leader Peter Robinson indicated his party would wait for this exercise to be completed before making a decision regarding negotiations.

Heard SoS's holding statement & commitment "in the coming days" to respond to concerns. This delays start of Talks. We await her response. 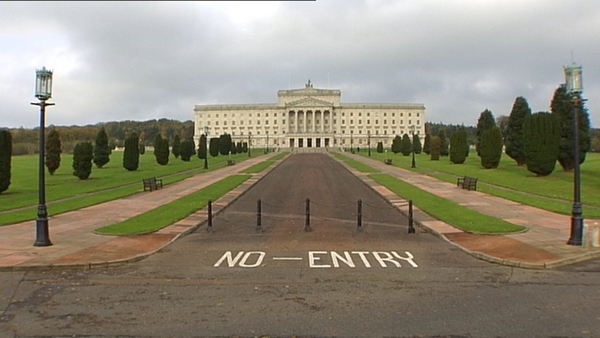