Minister for Finance has admitted ditching plans to burn investors in a rogue bank after a last-minute call from the European Central Bank warning him a bomb would go off in Dublin.

Michael Noonan said he was on his way to the Dáil on 31 March 2011 to announce his proposals to the nation to make institutional investors share in the pain of the collapse.

The move would have seen senior bondholders in Anglo Irish Bank, the doomed property lender at the centre of the Irish banking crisis, hit with €6bn losses.

However, Mr Noonan took a last minute call from Jean-Claude Trichet, then ECB president, which forced him into a U-turn moments before his announcement.

"He [Mr Trichet] said if you do that a bomb will go off, and it won't be here, it will be in Dublin," Mr Noonan told the banking inquiry.

Asked about the reported remarks in April, Mr Trichet said it "would have been totally not in line with the relationship I had with the Government".

But Mr Noonan, for the first time confirming the starkly-worded warning, said he had no doubt about what was said.

"I can assure this committee that he said it. He did not use the word economic," he said.

Mr Noonan said there were two phone calls between himself and Mr Trichet as well as a conversation with Taoiseach Enda Kenny moments before a declaration was to be made in the Dáil.

The ECB chief also warned him the move would be considered a default by the markets and could badly hit the financial services industry in Ireland, he said.

After talks with his officials, Mr Noonan said he eventually decided to drop the planned burning of bondholders, having advised the Taoiseach the risks outweighed the potential gains.

"I changed my script and did not propose burden sharing in the Dáil," he said.

"The word 'threat' was never used by myself or Trichet," he said.

"It was a conversation - he was pointing out facts as far as he was concerned. I don't want to exaggerate this."

Mr Noonan also told the inquiry, on its last day of public hearings, he expects Ireland's banking bailout to cost between €30bn and €35bn.

"Taking all of the figures together, it is now apparent that the ultimate direct cost of the bank recapitalisations will be the funds invested by the previous Government into Anglo Irish Bank," he said.

"We have taken steps to limit this cost but the final cost, based on the best information available to me at present, will be between €30bn and €35bn."

Mr Noonan said the benefit of paying back the IMF loans early is likely to be closer to €2.1bn rather than the earlier estimate of €1.5bn.

Mr Noonan said he didn't think banks gave full information on the night of the guarantee, in particular Anglo.

Public hearings at the inquiry have ended.  Mr Noonan said it was an honour to be the last witness. 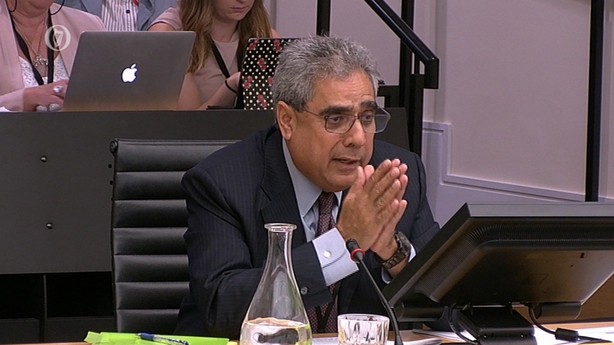 Former deputy director of the IMF Ajai Chopra earlier attacked the ECB's communications with Ireland in the lead up to the bailout and accused the ECB of issuing ultimatums.

Speaking at the final public banking inquiry hearing today, Mr Chopra was critical of a letter sent to then finance minister Brian Lenihan by Mr Trichet, in November 2010.

Mr Chopra said "ultimatums are not the right way to do business".

He said that the ECB exceeded its mandate by discussing Ireland fiscal policy and need for structural reforms.

He told the banking inquiry that Ireland shouldered a higher burden and has higher public debt because burden sharing was avoided.

He acknowledged that he was the public face of the bailout although he added it was a team effort.

Mr Chopra, who was responsible for the design and monitoring of Ireland's bailout programme from 2010 to 2013, is appearing before the banking inquiry in a voluntary capacity.

He said liquidity assistance was begrudgingly provided and its availability and stability was not assured.

A public statement would have helped restore confidence in the banking system, Mr Chopra said.

Europe's decision to require each country to save its own system worsened the crisis, he added, saying it was a significant achievement for Ireland to exit the bailout although some legacy issues remained.

Marco Buti, Director General for Economic and Financial Affairs at the European Commission since December 2008, has told the inquiry that the EC had a limited role in monitoring countries' fiscal plans.

In his opening statement, Mr Buti said the EC played no role in regulating and supervising domestic banks prior to any programme implementation.

He said this position then changed when Ireland entered its bailout programme.

He said he agrees with the conclusion by most who appeared before the inquiry that Ireland's crisis was home-grown.

In relation to the blanket guarantee, he said he believed it was too generous but he said the decision was taken during a very difficult time and did not envy decision makers during that time.

He told the banking inquiry that burden sharing was judged to be too risky at a time of unprecedented uncertainty.

The three Troika members came to a common judgment that the spillover risks were too much, he said.

Banking inquiry chairman Ciarán Lynch said the committee would provide lessons from the past and had allowed the Irish people to hear from the key institutions first hand.

He said the inquiry has been fair and impartial as well as open and transparent.

The committee has heard from 128 witnesses over 49 days since last December.

"I note the ECB's upcoming engagement with the European Parliament's Economic and Monetary Affairs Committee on the Irish banking inquiry.

"This is an absolute minimum from the ECB. The position of the Fine Gael delegation in the European Parliament has always been that the ECB should engage fully with the Irish banking inquiry," he said.

"As a full member of the Economic and Monetary Affairs Committee, I welcome the opportunity to question Mario Draghi about the Irish banking crisis at the Monetary Dialogue with the ECB."