The European Union has announced it will release €500m to aid European farmers hit by plunging milk and meat prices, partly blamed on a Russian embargo.

The announcement comes as thousands of farmers staged a noisy protest in Brussels.

He said the failure to address the intervention price for milk was very disappointing given the difficulties faced by dairy producers.

The commission said it had not yet finalised the national distribution of the support funds but there would be "particular regard to those member states which have been most affected by market developments".

Minister for Agriculture Simon Coveney has said the deal agreed for farmers is beyond expectation.

He has called for immediate clarification on how the funds will be distributed between EU member states and also for further details of the measures envisaged.

Speaking on RTÉ’s Six One News, Mr Coveney said that pigmeat and dairy farmers will benefit largely, adding that he expects circumstances to improve.

The protest involving mainly Belgian, French and German farmers targeted the heavily-guarded European Union headquarters where agriculture ministers were due to meet to tackle the crisis.

A combination of factors, including changing dietary habits, slowing Chinese demand and a Russian embargo on Western products in response to sanctions over the Ukraine conflict, has pushed down prices for beef, pork and milk.

"Europe is drowning in milk," according to banners held aloft by farmers representing the European Milk Board. 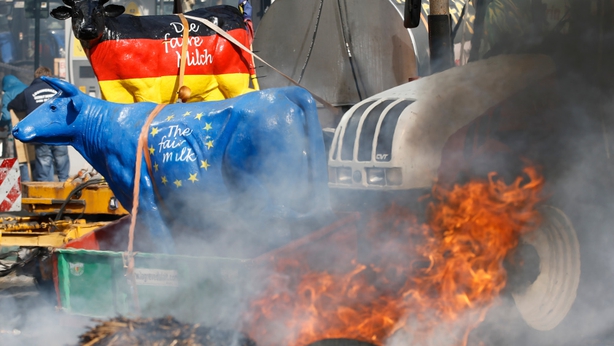 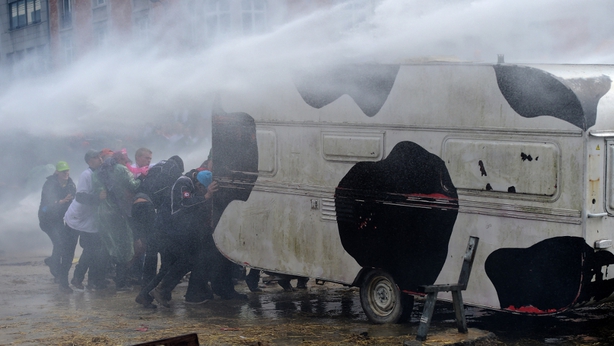 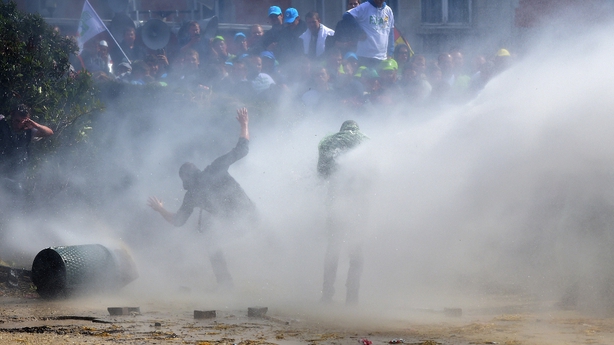 A group of French milk producers from Calvados said they were demanding a fair price for their produce.

In France, the agriculture minister has estimated that around 10% of farms, approximately 22,000 sites, are on the brink of bankruptcy with a combined debt of €1bn.

The council, which represents the 28 member states, said the agriculture ministers will debate "the state of play of agriculture markets in the EU" with much of the focus on milk prices.

The ministers would also discuss "the impact on the EU market of the import ban on EU agricultural products imposed by Russia," the council said.

In July, the EU extended until next year a multi-million euro aid package to help struggling European farmers hit by Russian sanctions over the Ukraine crisis.