In a strong attack on Sinn Féin, Taoiseach Enda Kenny has said it is the responsibility of Sinn Féin, and in particular its leadership, to address the issues at the centre of a crisis in Northern Ireland's devolved government.

Warning a time of "constructive ambiguity" about "incredible statements" from Sinn Féin had now passed, Mr Kenny said "paramilitarism, and all its vestiges, must be removed. They are incompatible with democracy and the hopes and demands of democrats".

He said: "We have become used to incredible statements be they be about past activity, current activity, murder, robbery and child abuse. There may have been a time when living with constructive ambiguity helped the peace process. But that time is now past."

Speaking at a British-Irish business forum in the UK tonight, the Taoiseach also said: "It is not for Sinn Féin alone to help make progress.  All of the parties, and both governments, have responsibilities to shoulder.”

Taoiseach says it is the responsibility of Sinn Féin to address issues at the centre of a crisis in NI's government https://t.co/J8si6yMrEN

He added the "shadow of the gunman" was not confined to one side and “the poison of paramilitarism is not just confined to so-called republicans. It is still deeply embedded in loyalist communities, often with nakedly criminal agendas".

Mr Kenny said democratic politicians, of whatever persuasion must dissociate themselves from paramilitary organisations "fully".

These politicians, he said, "must commit themselves, and fully, to the democratic institutions, and to the law, whether expressed through the Executive, the Assembly, the courts, the police service or, indeed, the Parades Commission.

"What steps are needed must be taken now. No shared platforms or strategies. No shady grey areas between right and wrong. The peace we have now was built by the people of these islands, through their commitment to non-violence and reconciliation," he added.

The Taoiseach also spoke about the referendum on a potential British exit from the EU.

The referendum has been promised by Mr Cameron before the end of next year.

Mr Kenny said the economies of the UK and Ireland had been closely aligned and he expressed the hope that the EU would not lose one of its foremost  members.

He said the Irish Government recognised it was up to the people of the UK to decide, but that Ireland wanted to see the UK remain in the EU and would work to actively achieve that.

He added Irish business has made clear that Ireland cannot afford the commercial uncertainty of a British withdrawal from Europe.

While a date has not yet been set for the referendum in the UK, it will happen before the end of next year, with increasing speculation that voting could be set for next September. 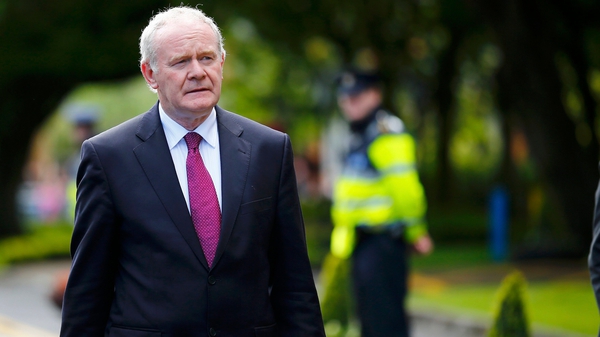 Sinn Féin says it won't back 'austerity agenda' for NI