Man arrested following drug seizure worth over €800,000 in Blanchardstown

A man in his late 30s has been arrested following a seizure of a quantity of drugs with an estimated street value of €886,000 in Blanchardstown, Dublin today.

The man is currently detained at Blanchardstown Garda Station.

40 sheep stolen near in Monaghan

Gardaí have appealed for information following the theft of 40 sheep from lands near Castleblayney Co Monaghan.

The 20 ewes and 20 lambs were taken from lands in the townland of Drumleek North sometime on Monday or Tuesday during daylight hours.

The animals are valued in the region of €6000. Anyone with information is asked to contact gardaí in Castleblayney.

Carter confirms cancer has spread to his brain 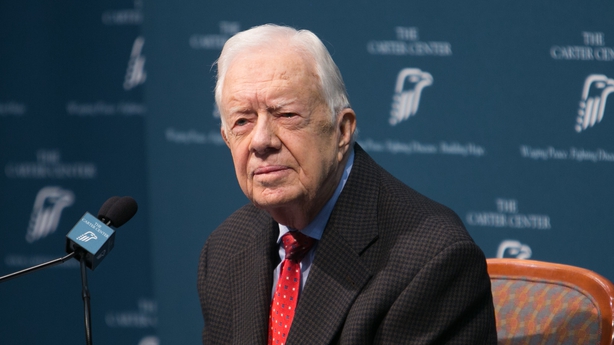 Former US president Jimmy Carter said he has cancerous tumours on his brain and is beginning radiation treatment.

The 90-year-old Nobel peace laureate told a press conference said the finding of the four melanoma spots stemmed from a procedure in which a tumour was removed from his liver.

"They did an MRI and found that there were four spots of melanoma on my brain," said Mr Carter, in good spirits.

"I get my first radiation treatment for the melanoma in my brain this afternoon."

IS claims responsibility for attack on Cairo police station

The Islamic State group has claimed responsibility for a car bomb attack on a police building in the Egyptian capital that wounded 29 people, including six policemen.

The powerful blast in Cairo's northern Shubra district came in the middle of the night, the latest in a wave of militant attacks targeting security forces.

"The soldiers of the Islamic State managed to target a police building by a car bomb in the heart of Cairo," said an Islamic State statement posted on a Twitter account affiliated with the group.

The building houses a centre for investigating threats to national security.

Thousands of people have travelled to Clifden in Co Galway for the annual Connemara Pony Show.

Local business people say there has been a significant increase in tourism in the region this summer, with visitors from abroad up 25% on last year.

Breeders from all over the world are taking part in the show with the Danish and Swedish Connemara pony societies celebrating their Golden Jubilees.

The Connemara pony is renowned worldwide because of the versatility of the breed and the festival continues until Sunday.

Waterford Council has strongly defended its handling of a controversial development in the city.

A US pharmaceutical company is bringing around 200 jobs to the Knockhouse area on the outskirts of Waterford with the building of a new facility, but the site contains the remains of a ring fort dating from around 800AD.

The Council has known about this ring fort for many years and the company is working with the local authority and the National Monuments Office to excavate the site.

However, a local campaign group say not enough is being done and they do not want to see the ring fort concreted over after the archaeological dig is finished.

South Korea has fired dozens of shells across the border into North Korea in retaliation for an apparent rocket attack, according to the defence ministry in Seoul.

A ministry spokesman said South Korea had detected the trajectory of a rocket fired from the North Korea side along a western section of the border shortly before 4pm (8am Irish time).

"Our military in response launched dozens of rounds of 155mm shells towards the site from which the North Korean military launched the rocket artillery," the ministry said in a statement.

It was not immediately clear what, if any, South Korean unit had been targeted by the North Korean rocket, and there were no reports of any strike on the South side of the border.

A Tunisian policeman has been shot dead in Sousse, the coastal resort where 38 tourists, including three Irish people, were killed in June.

Two assailants on a motorbike shot at three policemen on a road, hitting and killing one, a Tunisian security spokesperson said.

The other two policemen were not injured in the attack.