Property rental inflation has eased over the past year, but is still high at 8.6%, according to the latest quarterly rental report from Daft.ie.

Rental inflation is now higher outside Dublin than in the capital.

Year-on-year property rental inflation is now running at 17 times the rate of consumer price inflation, and that is after a slowdown driven by developments in the Dublin market.

Inflation in rents has fallen in Dublin over the past year from 15% to 8.5%.

Rental inflation outside Dublin is now 8.7% - the first time in the current cycle that rents have risen more steeply outside the capital.

Rental price rises are being driven by a shortage of available properties.

On 1 August 2009, there were 23,000 properties available to rent, reflecting both the lack of construction and population growth since then.

To buy or to rent? Find out about your area in the #DaftReport → http://t.co/6d8HO5Rqkn pic.twitter.com/CLXLjG7elz

The report's author, economist Ronan Lyons, said students in particular will find rental conditions in Dublin every bit as tight as last year, and in some parts of the country conditions will be even tighter.

Speaking on RTÉ's Morning Ireland, he said the demand for rental properties is a huge problem for the economy.

"If prices of rents are going up by 5, 10, or 15% and roughly speaking the general cost of living isn't going up at all, that's a huge problem for the economy.

"And it signals that there's a lot more demand than supply in economics terms, or in lay terms, we have a growing population but we've got pretty much a fixed pool of houses so we need to get more supply built," he said.

He added that it was the first time in this market cycle that Dublin was behind the national average at 8.5%.

"It's not because the situation is getting better in the Dublin market. If you look at the number of the units on the market available to choose at any point in time; that's been 2,000 now for over two years. That's a very low level given the number of people renting in Dublin," he said.

Mr Lyons said people have reached a limit of affordability, and are choosing to live outside the capital.

He said what happens in a market situation with a lack of supply is "income wins out".

He said there is a very serious end to this problem, citing the recent reports of families being left without emergency accommodation.

Mr Lyons said the cost of construction has to be the number one priority to address the lack of supply.

"We could have much better outcomes ... We can talk about reforming social housing, we can talk about subsidies, or councils building or buying homes but until you actually address the symptoms everything is really just a plaster and you don't know what the underlying illness is," he said.

Estate agents in Galway say the rental market has been steadily rising over the last 12 to 18 months.

In the city especially, the demand for rental accommodation is far outweighing supply.

Estate agent with Douglas Newman Good James Heaslip says the demand for rental apartments by young professionals is at an all time high.

A typical two-bedroom apartment in the city centre, around the docks area, would have rented a year ago for around €800 per month. The same apartment is now fetching as much as €950 per month.

Mr Heaslip said the shortage of supply combined with the lack of new building and a growing population has created the perfect storm.

He said one possible solution would be to look at long-term unfurnished letting as is the norm in European countries like France.

Meanwhile, he said students were being squeezed badly as a result of this rental shortfall.

Rental problem will get worse - USI

Meanwhile, the President of the Union of Students Ireland has said there has been an accommodation shortage in Dublin, Cork and Galway for the last number of years.

Kevin Donoghue said that this year in particular the supply is not there to meet the demand, and students are picking their courses on the basis of whether they are going to be able to find accommodation.

He said students are increasingly being expected to take on 12 month contracts as opposed to the nine month contract covering their college attendance.

Mr Donoghue said the number of students attending third level is rising ever year and the rental problem is going to get much worse before it gets better.

"The problem is focused in three particular areas: Dublin, Cork, and Galway. It has been a problem for the last number of years that accommodation has been increasingly in short supply.

"This year in particular the supply just is not there to meet the demand and people are having to commute from longer and longer distances and we're now finding a situation where people are starting to pick their courses or where they're going to go to college on the basis of whether or not they're going to be able to find or afford accommodation," he said.

He also called for the construction of more purpose built student accommodation, as well as promoting the rent-a-room relief scheme.

He said anyone who is depending on the supplement should have some level of certainty of what their rent will be, so they can plan for the future.

He welcomed the investment in housing, but said a solution is needed now and has urged the Government to act accordingly.

He described the housing crisis as an "emergency". 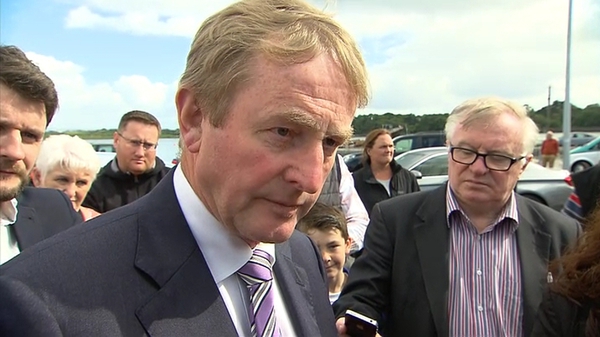 Homelessness crisis not due to money or resources - Taoiseach