Greek Prime Minister Alexis Tsipras has told Greeks the problems they face because of closed banks "will not last long".

He said he expected to clinch a new aid deal with creditors 48 hours after a Sunday referendum.

He blamed Greece's eurozone partners that forced the European Central Bank to freeze vital funding to the banks.

Earlier, the chair of the council of eurozone finance ministers warned that Greece was likely to "have no place in the eurozone" if it voted No in Sunday's referendum on whether to accept the terms of continued international aid.

Addressing a Dutch parliamentary committee, Jeroen Dijsselbloem said Greek voters should not expect to get better terms from their creditors by voting No in the referendum.

Mr Dijsselbloem said that while the offer on which Greeks were being asked to vote had expired, the referendum would show whether Greeks were prepared to make the painful sacrifices needed to stay in the currency bloc.

"One illusion must be swept from the table: that if the outcome is negative then everything can be renegotiated and you will end up with an easier and more attractive package," said Mr Dijsselbloem, who is also Dutch finance minister.

Far-reaching austerity measures are needed to put the Greek economy back on track, he said.

His remarks contradict those of Mr Tsipras, who said a No vote would force the Eurogroup and other lenders to come back with a more favourable offer.

Mr Tsipras has urged people to vote against the latest bailout deal offered by European governments, the European Central Bank and International Monetary Fund, slamming their conditions as "humiliating".

Although Athens insists the referendum is just about the conditions attached to the bailout that expired this week, EU leaders say it is actually a vote on whether Greece wants to remain in the euro.

Mr Dijsselbloem told reporters the eurozone countries were still prepared to help Greece in the event of a Yes vote.

"The future of Greece is in the hands of the Greek people," he said.

"If the outcome is positive, then there is naturally, on the European side, the willingness to help Greece out of the gutter."

Meanwhile, French President Francois Hollande has warned that Europe would be entering "unknown" territory if Greeks voted against tough austerity conditions attached to the bailout in the make-or-break referendum.

"If the No wins we're entering into the unknown. It's up to the Greeks," he told reporters on a trip to Benin.

"If it's Yes... negotiations can very easily begin and a deal I believe will be reached very quickly."

Elsewhere, Greek's Finance Minister Yanis Varoufakis said in an interview on Bloomberg TV today that he would no longer serve as finance minister if the Yes vote wins the vote. 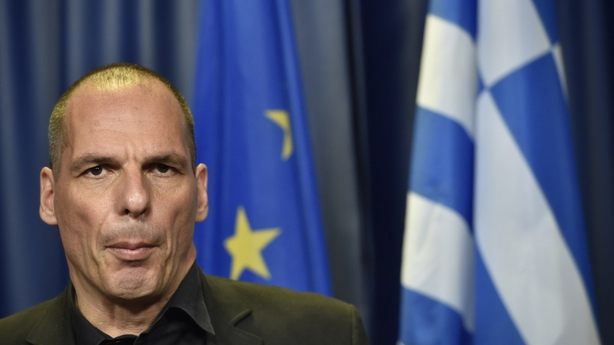 Asked if he would be finance minister on the day after Sunday's referendum if the Yes vote wins, Mr Varoufakis said: "I will not".

Mr Varoufakis also said today that the country no longer had the presses to make drachmas.

In 2000, the year before Greece joined the eurozone, "one of the things we had to do was get rid of all our printing presses" as part of the bloc's assertion that "this monetary union is irreversible," he said.

Greece needs at least €50bn more, including €36bn from EU lenders, to stabilise its finances even under existing creditor plans, according to the International Monetary Fund.

In a new report on Greece's financing needs, the IMF also cut the country's economic growth prospects for this year to 0% from 2.5% previously forecast, in estimates that do not include the impact of this week's banking shutdown and capital controls.