The Pro-Life Campaign has said it takes issue with a United Nations committee telling Ireland how its people should proceed in the area of abortion.

The Committee on Economic, Social and Cultural Rights yesterday recommended that a referendum be held on abortion in Ireland.

The committee also urged the Government to adopt guidelines to clarify what constitutes a real substantive risk to the life of a pregnant woman.

Speaking on RTÉ’s Morning Ireland, Cora Sherlock, the Deputy Chair of the Pro-Life Campaign, said she did not think it was appropriate for the UN to talk about "taking an opportunity to revisit the abortion debate".

Ms Sherlock said her group would welcome debate on the general issue of abortion but did not feel a referendum was necessary.

She also said the UN committee had made a mistake when it described the 2013 Protection of Life During Pregnancy Act as restrictive.

"That is an act which let’s remember allows abortion for the full nine months of pregnancy where there is threat of suicide and that's not based on any medical evidence.

"So if these recommendations from the UN are coming from the point of view that that is a restrictive act then I think the committee need go back and look exactly at what the 2013 act says, because it is not restrictive in any way and that is a fundamental error."

Also speaking on Morning Ireland, a member of the committee reiterated the view that the time has come to revisit the issue of abortion in Ireland.

Professor Olivier De Schutter said the mood has changed since the article on the protection of life of the unborn was introduced in 1983, and it was time to reopen the discussion.

Prof De Schutter said Ireland's laws on abortion are among the most restrictive in Europe and it is time for a debate to be held.

He said despite the Protection of Life During Pregnancy Act 2013, it remains unclear whether a woman has a right to an abortion and it leaves open the gap between women with the resources and knowledge to travel for an abortion and those who do not have those opportunities.

The Minister for Public Expenditure and Reform, Brendan Howlin, has said there will not be any referendums before the next general election.

Mr Howlin said the Labour Party would put the issue of repealing this section of the Constitution in its manifesto in the next election. 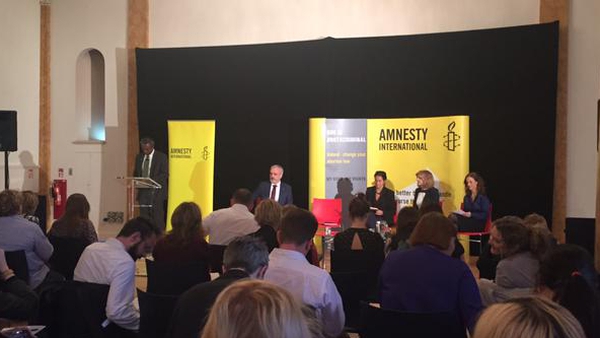