A planned strike by SIPTU and National Bus and Rail Union members at Dublin Bus and Bus Éireann has been called off.

The announcement that the five remaining days of industrial action have been cancelled came after 15 hours of talks at the Labour Relations Commission.

Union members were due to strike tomorrow and Saturday, as well as on 29, 30 and 31 May.

A five-page document setting out the terms of the settlement was accepted by all sides, after the protracted negotiations under the auspices of the LRC.

The document states no employee of the companies will be compulsorily required to transfer to a new contractor and a registered employment agreement will be put in place.

A market growth strategy is also included to see the companies develop.

Unions were also assured that it is not Government policy to put the remaining 90% of routes out to tender after 2019.

However, plans to put 10% of bus routes out to tender will go ahead.

Agreement welcomed by unions and employers

SIPTU has said the deal will give legal effect to the assurances workers have received regarding their terms and conditions of employment at Bus Éireann and Dublin Bus.

"So what we have effectively is a road map which is going to put flesh on the bones of the minister's commitment.

"We've created a dynamic and a process that is going to give actual legal effect to the minister's commitment of security of employment for workers, protecting their terms and conditions of employment, dealing with the legacy costs."

He said the union still does not support plans to put 10% of bus routes out to tender and still believed it was the wrong way to go.

The NBRU has said that the deal goes a long way towards allaying the fears of its members.

Speaking on the same programme, NBRU General Secretary Dermot O'Leary said the LRC had successfully brought the parties to a point where the unions felt able to call off their planned industrial actions.

He said the agreement addressed many of the issues they had raised.

"When we started the campaign last year in opposition to this whole policy we felt very strongly that this was a privatisation grab by the Government.

"We've now been assured that the intention of the Government is not to privatise."

On behalf of the employers, Joe Kenny of Bus Éireann said they are very happy the strike action has been averted and that customers will not be disrupted.

He said all parties worked to bring about an agreed way forward but there is still further work to be done.

Bus Éireann added in a statement that it "would like to thank all parties involved in the talks process, especially the Labour Relations Commission, and we look forward to progressing the outstanding issues as agreed in the coming weeks".

Planned Industrial Action called off on May 15th & 16th, our services will operate as normal Fri 15th & Sat 16th May http://t.co/aotQAn2rLJ

In a statement, Dublin Bus welcomed the settlement proposals and the withdrawal of the further planned industrial action.

It said: "Our services will operate as normal on Friday 15th and Saturday 16th of May.

"We thank the Labour Relations Commission for their assistance throughout this process and also thank all the parties involved in the talks for their positive and constructive approach."

Minister for Transport Paschal Donohoe also welcomed the decision to call off the strike. 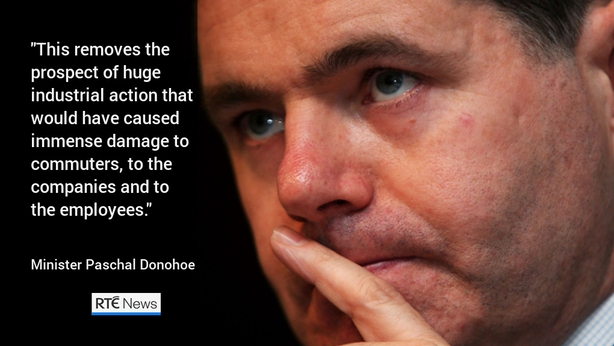 Also speaking on RTÉ's Morning Ireland, Mr Donohoe said: "This removes the prospect of huge industrial action that would have caused immense damage to commuters, to the companies and to the employees."

Mr Donohoe reiterated that any bus company employee who is on a route that could be tendered out in the future, would not be required to transfer due to the growth in the market.

The minister said the tendering process will happen and he has committed to discussing with unions in the future concerns they may have in relation to the implementation of this policy.

Earlier, Mr Donohoe thanked the LRC for its work.

Labour Relations Commission Chairman Kieran Mulvey said it was a very complex dispute, because it involved matters of transport policy as well as industrial relations issues.

He said they spent a lot of time with all parties to the dispute this week to see how to progress the agenda.

The agreement addressed the concerns of unions at Dublin Bus and Bus Éireann about the potential to put out to tender routes outside of the 10% currently being pursued.

Both SIPTU and the NBRU stated concerns that, under the current legislation, the National Transport Authority may be compelled to tender the remaining 90% of bus routes after 2019.

The LRC document said: "The minister had stated this was not the intention of the Oireachtas when the legislation was passed" and that "the minister has publicly rejected the suggestion that Government policy is to move towards the privatisation of public bus services".

It went on to say that the department "has heard the concern of the trade unions and other parties that the legislation may not reflect the stated policy of Government with regard to the bus market".

The LRC concluded that "clarity" was needed and that this required a consultative process to deal with any perceived ambiguity.

At an event at the Little Museum of Dublin this afternoon, Minister Donohoe was asked about the concerns that had been raised and the assurances given.

He said: "In relation to the future of policy, I have always made clear that it is not my intention, or the intention of Government, to lead to a situation where the entire bus market is deregulated.

"The policy of tendering will continue, and we will put in place a process to look at the concerns that unions have in relation to this policy in the future.

"A report will come back to me later on in the year, and we will look at this process to ensure that the confidence of all stakeholders, in relation to the future of the bus market, is maintained." 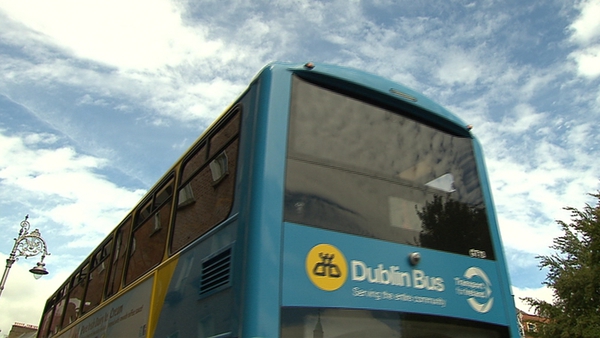