Five units of the Fire Service, including two aerial appliances and three fire engines, are at the scene and will remain there overnight.

Dublin Fire Brigade says the fire has been contained to one half of the building, and firefighters have managed to stop it spreading.

The roof of the building began to buckle this evening as breathing apparatus teams tackled the blaze on the ground and upper levels.  Members of Dublin Civil Defence are also at the scene to offer assistance.

Emergency services received a call out to the fire at around 10.15am. 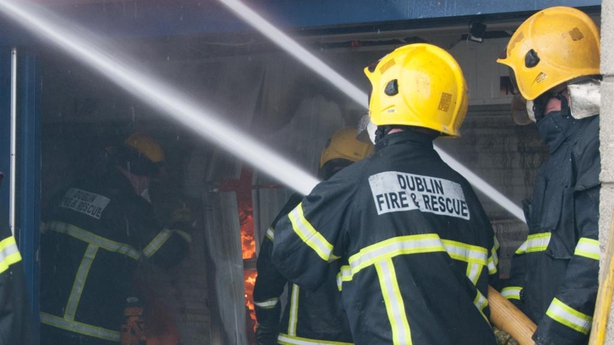 Dublin Fire Brigade earlier said strong winds were hampering efforts to control the blaze. People in the surrounding areas were advised to close their windows.

The Fire Incident Commander asked people to avoid the area if possible and not to get distracted on the adjacent M50.

The area was evacuated earlier but at present there are no reports of any injuries.

COPD Support Ireland is warning people with respiratory conditions such as COPD and Asthma to avoid the area if possible and to stay indoors with the windows and doors closed.

"Due to the possible changes in wind direction, it is important to check your local forecast and if at all possible wait until the fire has dissipated" the group said.