A settlement of €3.8 million has been agreed by the Health Service Executive in the case of a 12-year-old boy who was left paralysed after being treated for meningitis.

Matthew McGrath was left without the use of his arms and legs after contracting meningitis when he was 17 months old.

Wexford General Hospital has admitted liability to Matthew and his parents.

The High Court settlement is an interim one to cover five years of his care.

In May 2004, Matthew was unwell and his GP referred him to Wexford General Hospital for urgent assessment.

He was admitted just after midnight and observed, but meningitis was not diagnosed at that time.

His condition deteriorated and the next morning at 11.30am a consultant carried out a lumbar puncture procedure.

Mr McGrath's lawyer told the court that this caused a collapse in the brain and compromised the spinal cord. 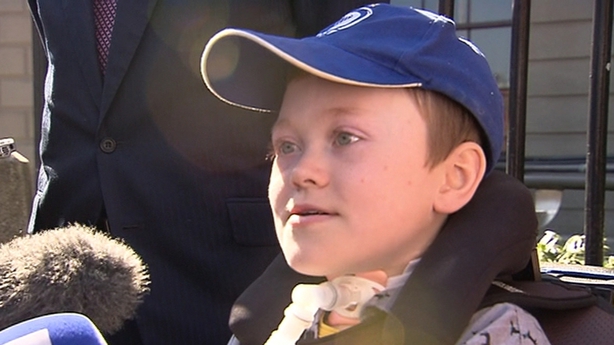 He needs permanent ventilation and uses a colostomy bag and a catheter.

The court heard that he is very cheerful, engaging and a totally involved member of society.

He requires 24-hour care and his life expectancy has been shortened.

The settlement amounted to €3,731,500 for the next five years of care and will be reviewed again at that time.

Matthew spoke with the judge in court and said he was happy to be at home and happy with the settlement.

Speaking outside the court afterwards, Matthew's mother Cathy said it had been a fight and life would be still the same but they would not have to take on the system.

She said they still had to deal with the daily challenges of caring for Matthew.

She said Matthew was a personality and a great child who enjoys life.

The family's solicitor Roger Murray said adversity had been overcome.

He said Matthew was unique because he was one of the most disabled children to be cared for at home but the parents had to battle for that and they had to battle to get the admission of liability.