Turkey has recalled its ambassador to the Vatican after Pope Francis described the killing of 1.5 million Armenians 100 years ago as "genocide".

This came after the Pope described the massacres of Armenians by Ottoman forces during World War I as "genocide".

"To read these sorrows in a one-sided way is inappropriate for the pope and the authority that he holds," Mr Davutoglu said in televised comments as a diplomatic row escalated between Turkey and the Vatican.

He added: "We'd expect the religious leaders to call for peace. Opening archives for those whose hearts are sealed serves no purpose."

Mr Davutoglu lamented that the Pope's comments were not in line with his statements in favour of reconciliation during his visit to Turkey in November.

"I hope the Pope stands behinds his opinions he expressed (to us) when he came to Turkey and revises his recent attitude," he said.

Muslim Turkey accepts that many Christian Armenians died in clashes with Ottoman soldiers beginning in 1915, when Armenia was part of the empire ruled from Istanbul, but denies hundreds of thousands were killed and that this amounted to genocide. 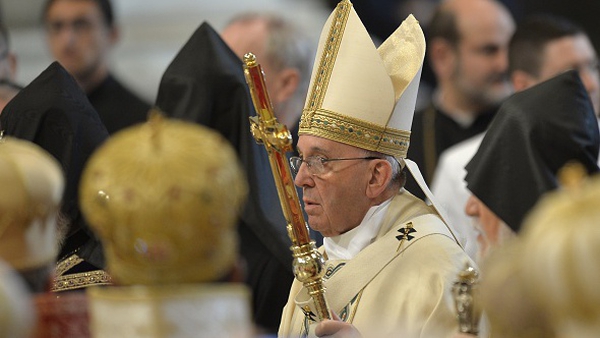