There was stringent criticism of RTÉ's coverage of the water charges issue at this evening's meeting of the parliamentary Labour Party.

Dublin Central TD Joe Costello singled out last night's Prime Time programme, which he said had featured the entire Dáil membership of the Socialist Party opposing the charges, without giving an opportunity to Government TDs to put the case for their policy.

His comments were backed by Minister for Public Expenditure and Reform Brendan Howlin, and a substantial number of other Labour TDs and senators.

Their comments came as former minister Pat Rabbitte claimed that RTÉ is acting as what he called a recruiting sergeant for the far left and Sinn Féin on the water charges issue.

Mr Rabbitte said that RTÉ must know of the problems with the Irish water network, but appeared to rely heavily on a source inside the company supplying what he characterised as distorted information and half truths, bits of emails and internal papers.

The former communications minister said that RTÉ’s treatment of the water issue had fallen short of what licence fee-paying citizens should expect.

In a speech in the private members debate on Irish Water, he said that if he did not know better, he would conclude that the "lopsided" coverage of the water issue derives from a decision of the RTÉ Board to strangle Irish Water at birth.

Mr Rabbitte warned that "following the Pied Pipers of the Anti-Austerity Alliance" would only leave people with debts that they need not incur.

He said: "Just as they did with the bin charges campaign, the Pied Pipers will move on to their next campaign having left homeowners with accumulating debts and the bin collection system privatised."

In a statement, RTÉ said it "absolutely refutes" the claims of imbalanced and biased coverage of the introduction of water charges.

It said that this has proved to be a contentious issue and that RTÉ analysis, debate and coverage has been proportionate and objective.

She said they are "deeply troubling coming from a former Minister of Communications. To say that RTÉ have been biased in their coverage of a matter of such enormous public interest smacks of desperation from a Government that is clearly rattled by the huge turnout at the water protests and now seeks to stifle media coverage".

He added: "Interestingly Minister Howlin came in especially for his contribution and two journalists miraculously appeared when there was no journalists in the gallery, clearly tipped off by Deputy Rabbitte that he was going to say something about RTÉ in his speech."

He said the issue of political bias at RTÉ was raised at this morning's meeting of the Oireachtas Transport and Communications Committee.

He said: "The house would do well to heed the words of the former Minister for Communications."

Also speaking during the debate, Ms McDonald said that Minister for the Environment Alan Kelly described people who stood against water charges as "enjoying failure".

Ms McDonald said that he has a "cheek" to depict such a cheap and nasty picture of working people.

She also criticised the €650,000 spent on an advertising campaign.

Her party colleague Caoimhghín Ó Caoláin said that in recent months there has been vilification of people involved in water charge protests.

He said that this is the type of hypocrisy that has put politics into "disrepute".

Independent TD Mick Wallace said that people in Wexford are not drinking good water. Raw sewage is going into rivers and not one thing has been done by the government in the last four years to sort it out.

People Before Profit TD Joan Collins accused Mr Kelly of starting a campaign of intimidation and fear against those opposed to water charges.

Independent TD Thomas Pringle said the campaign against water charges is a culmination of people's anger against all the charges and taxes they have been subjected to over the past seven years.

Fine Gael TD Catherine Byrne said she gets very angry when she hears Opposition TDs saying that they will not pay water charges.

She said they are undermining democracy by not obeying the law of the land.

She spoke of the constituents who want to pay and cited the example of elderly people in her constituency who have said they want to pay the charge.

He said that every single country in Europe already has water charges.

He also accused Sinn Féin of "hypocrisy" as he said there are water charges in Northern Ireland.

The Private Members' Motion to abolish water charges was defeated. 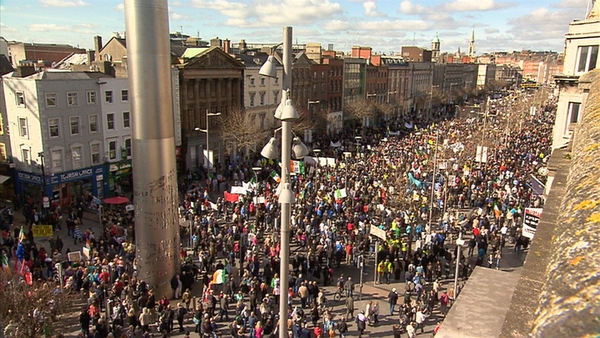 Tens of thousands protest over water charges in Dublin