The Obama administration has ruled out the possibility of illegal Irish immigrants in the US having the right to travel home to Ireland for humanitarian reasons.

Under the executive actions announced by the US President last November, there had been a suggestion that special dispensation could be granted to those who applied for permission to re-enter in advance of travel for humanitarian reasons.

The right to travel is also something Taoiseach Enda Kenny and other ministers travelling to the US for St Patrick's Day had pushed for this week.

But speaking exclusively to RTÉ News in Washington DC, the White House Director of Domestic Policy, with special responsibility for immigration reform, Cecilia Munoz, said the administration could "not provide the right to travel for undocumented immigrants, what we have to do is put them on a path to legal status", adding that this was the objective of immigration reform. 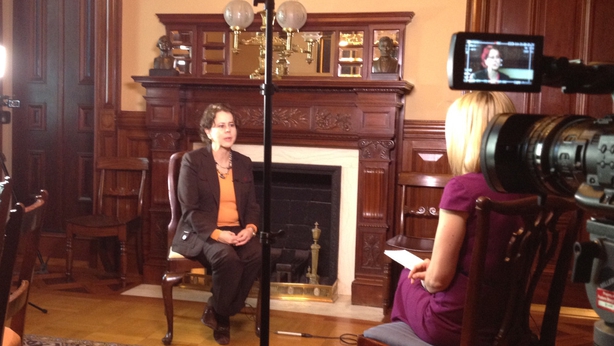 Ms Munoz said the president could only take limited measures in the absence of Congress passing legislation.

She said immigration reform would remain a priority of the Obama administration, but said there was a realisation that the likelihood of Congress taking the issue on was now small.

The Senate passed a strong bi-partisan bill almost two years ago but it was never tabled for a vote in the House of Representatives.

Ms Munoz said that was "very frustrating" for the Obama administration because they felt they had the votes in the chamber to get it passed had it been voted on.

She said the failure to get new immigration legislation was purely down to a lack of political will on the part of Republican leadership.

President Obama's executive actions are currently stalled after a Texas court issued an injunction stopping them going ahead pending the outcome of a full hearing over whether the president possessed the powers to do what he did.

The president is being sued by Texas and 25 other states over the matter.

Ms Munoz, who is the lead person in the White House working on immigration reform for the president, said that Irish-Americans were part of the immigrant history of the US, but were also part of the immigrant present, and that immigration law needed to be fixed, not just for the 50,000 undocumented Irish, but also to create a path to make it easier to come to the US legally.

She said President Obama knew that the executive actions would be controversial and that he would likely be sued.

So, she said, the Administration had "done its homework in advance" and so were confident in their powers and that the administration had taken a very aggressive position in the courts as a result.

Regarding the right to travel she said there was very little the administration could do for undocumented immigrants and the "remedy really is congressional action".

She said that the executive actions contained the potential for the right to travel for those who qualified under the deferred action programme for protection against deportation for three years - because they have lived in the US for longer than five years , with children who are US-born or legal residents - but that could not be implemented pending the outcome of the Texas court action.

Ms Munoz said it was "terrible" that people found themselves qualified for legalisation if they left the US and applied from Ireland, but in doing so they would become subject to the three or 10-year travel ban ... resulting in something of a 'Catch 22' situation.

She said the three and 10 year bans were put into the law in the 1990s to "really thwart" the intention of US legal immigration system.

She said if someone had an employer or a family member petitioning for them, that meant they had a visa available to them and they should be able to avail of that visa.

Ms Munoz pointed out that there were people even married to US citizens who if they were to leave to get the visa could not  come back for three or 10 years, and that was again a terrible effect of the current immigration laws, which needed changing.

She said there was a waiver on these bans as part of the executive actions but that implementation was at the discretion of the Department of Homeland Security.

She also said there was a risk to people applying for the deferred action programme in that there was no guarantee as to what would happen to them at the end of the three years.

However, she said there had been a positive experience by the 700,000 people who arrived in the US as children and had applied for the DACA programme.

She said ultimately it would be very hard for some future politician to undo the deferred action programme because it would have such benefits for those involved in it once the programme begins.

Although she said the deferred action schemes were "not benefits programmes" but were expressions of t the United States' enforcement authority; that it was essentially the government saying "we know you are deportable but you are a very low priority so rather than spend a lot of energy and resources removing you, we're going to spend that energy on people who've committed crimes and pose a threat".

She said President Obama was fond of saying it was not a question of 'if' but 'when' the law was going to be reformed, adding that it was in the best interest of the country and of both political parties.

Ms Munoz said she believed that day would come when they, the US, would be celebrating a new immigration law and she looked forward to that day.