The death toll from a bus crash in southern Brazil has risen to 54, as President Dilma Rousseff expressed her sadness over the incident.

The bus went off a twisting mountain road on Saturday and crashed 400m to the bottom of the ravine, landing on its side.

"It is with sadness that I learned the news of the death of 54 people in a bus accident in the Sierra Dona Francisca," Ms Rousseff said in a statement.

"In this hour of pain and suffering, I want to extend my condolences to the families and friend who lost their loved ones," she said.

Among the dead are the driver and eight children. Ten people were taken to hospital, but their conditions are not known.

A government official in Santa Catarina said the vehicle was likely carrying 59 people.

The bus was supposed to be carrying 50 people, authorities said.

Several ambulances and a helicopter were dispatched to the area and recovery efforts resumed this afternoon. 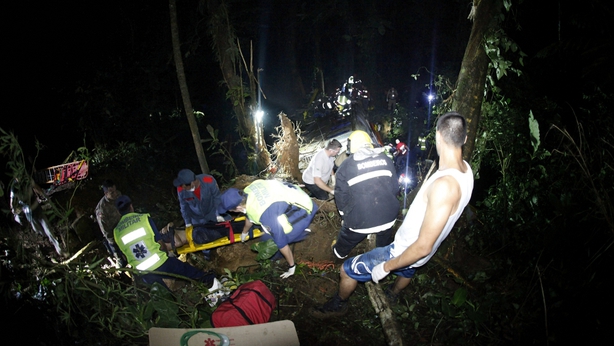 Authorities said the chance of finding any more survivors was slim.

Investigators will study the crash site and then the bus will be removed from the area.

There were no reports that foreign nationals were on board the bus.

According to witnesses, the driver lost control of the bus on a downhill turn.

Authorities have yet to determine the cause of the crash.

The bus was from a tourism company that covers a 300km route between Uniao da Vitoria and Guaratuba on the coast of Santa Catarina.

Nearly 100 rescue workers descended on the crash site, but the difficult terrain and night fall complicated the work.

Accidents are frequent on this winding rural road. 66 people have been killed on it in the last five years, reported newspaper O Estado de S. Paulo.

The Dona Francisca mountains in the south of the country attract thousands of tourists a year due to their largely untouched forest and vegetation. A popular lookout point in the area is 2km from the crash site was

Some 43,000 Brazilians die on average every year in traffic accidents on the country's congested roads.

Around 10,000 additional cars hit the city's streets every year in the growing nation.

Poorly maintained roadways, as well as excess speed and reckless driving are to blame for a majority of accidents, police say.

The country has adopted UN recommendations to halve traffic deaths and injuries by 2020.