A man alleged to be Graham Dwyer told Elaine O'Hara she had a big punishment coming up and she was going to be knifed in the guts the day before she went missing, the Central Criminal Court has been told.

The man tells her she will be well bound and gagged and tied to a tree deep in a forest.

He tells her he has a spot picked out.

The court has been hearing details of messages between two pre-paid mobile phones in August 2012.

One phone, called the "slave" phone, was used by Ms O'Hara.

The prosecution says the other, the "master" phone, was being used by Mr Dwyer.

The court heard that the master phone told Ms O'Hara on 21 August 2012 that she had to be punished for trying to kill herself without him and for being unavailable to him.

She was in a psychiatric hospital in Lucan at the time.

He told her he was going to get a lot of blood on his knife, then they could move on.

Ms O'Hara told him she was scared. Ms O'Hara tells the man she wants to try to have a normal life without all the talk about dying and asks him to please let her try.

She asks why he cannot give her bread and butter for a week as a punishment.

He says she has a big punishment coming up - getting knifed in the guts.  She says she knows.

The man tells her she will be well bound and gagged and tied to a tree deep in the forest. "I have a spot picked out," he says.

Ms O'Hara begs him to do it indoors.

Earlier she tells him that she is afraid if they go outdoors he might kill her.

He says he will not kill her. He says if he was going to kill her, it would be hanging once she was chained up.

She tells him later she will not leave the apartment and he will have to drag her out.

The man tells her she will do what she is f***ing told.  "I want outdoor play" he says.

The man tells her he has found a really, really remote place where no one will find them.

He tells her she has to be naked as they do not want blood all over her clothes.

The man alleged to be Mr Dwyer tells her to trust him. "It will be very exciting."

Ms O'Hara says she is really scared.  He tells her not to be scared.  "Look forward to be reunited with master," he says.

At 5pm on 21 August 2012, the person using the "master" phone tells her he is heading out to the spot to double check.

The court heard the master phone connected to a cell in Dublin 2 to send that message.

The court was also told Mr Dwyer's work mobile phone connected to the network through cells that covered Killakee Mountain in Rathfarnham later that evening.

The next day, 22 August 2012, Ms O'Hara tells the man she is just so scared about the talk of killing that night.

The man says he wants her to feel that her life is in his hands every time she submits to him.

Ms O'Hara asks him not to mention killing for a while, just until she settles back into life.

He says fine but he says that night's punishment will be like him pretending "to do someone for real".

He says it is important to him that she feels like it is his right to take his slave's life if he wants to.

He tells her not to wear underwear, to make sure she is fed and take pain killers at 5pm.

He tells her to enjoy a tiny bit of freedom as she is going to be in a lot of pain later and for the next few days.

He tells her to park at Shanganagh Cemetery at 5.30.

He tells her to leave her iPhone at home and bring her slave phone and keys and wait for further instructions.

He tells her it is never as bad as you think it is going to be and adds a smiley face.

He tells her to empty herself, become nothing.   "Your only job is to serve."

He tells her it is more painful getting stabbed on an empty stomach.

He tells her to make her way across the railway bridge into the next park near the cliffs.

Analyst Sarah Skedd said there was no further communication between the two phones after that message.

Earlier in August 2012, the person using the master phone tells Ms O'Hara her punishment will be swift and brutal. He says he might even kill her.

He asks her if anything happened to her, who knows about him.

She tells him no one knows about him and he says let us keep it that way.

These cells would be in very close proximity to each other, the court heard.

The trial earlier heard Ms O'Hara begged the man alleged to be Mr Dwyer not to kill her.

The court heard Ms O'Hara sent messages to the phone the prosecution says was used by Mr Dwyer, saying: "Please don't let me die" and "please don't kill me" in July 2011.

She told him she was scared he was going to kill her.

The court is continuing to hear evidence about messages exchanged between Ms O'Hara's phone and an 083 phone number the prosecution says was used by Mr Dwyer.

The court heard that at the end of July 2011, they discussed Ms O'Hara getting a "punishment".

The man using the 083 number offers her a choice between getting stabbed or strangled.

Ms O'Hara says she does not like either option but she says she cannot have marks on her neck so she chooses stabbing.

He says he is going to punish her in the hope she will learn her lesson and that she will hope next time it is someone else.

She says she always hopes it is someone else.

He tells her to boil a number of knives and have them laid out for him.

"You can die from blood loss not an infection", he tells her.

The day before they have arranged to meet up, Ms O'Hara asks if it is going to be "real bad".

She says she is scared. She asks him please do not let her die. "Please don't kill me, please."

He tells her she will not die like that.

O'Hara says she needs to be free of marks

In further messages, Ms O'Hara tells the man alleged to be Mr Dwyer that if she is ever going to find someone and have children, she needs to be free of marks. Unless the man is going to give her a child.

The man says he would but he would not be around to raise or support it.

She says having a baby has always been her priority.

After a discussion, the man says: "Ok, a life for a life."

He says if she helps him take a life, he will give her one.

Ms O'Hara tells him to set it up and she will help him.

There is further discussion in August 2011 about finding someone to kill.

On 3 August, the man alleged to be Mr Dwyer tells her he has found an empty house in Cabinteely with a young pretty auctioneer. 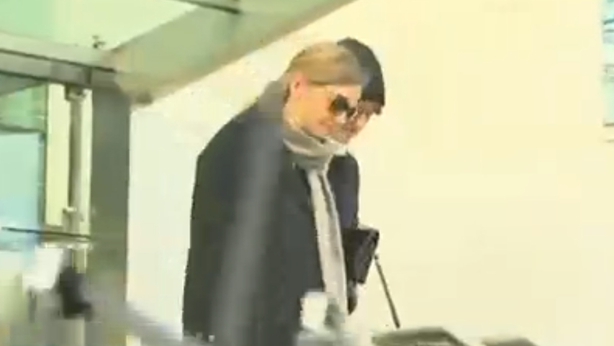 He names her as Rowena Quinn, an auctioneer who has already given evidence in the trial.

He tells her how he is going to rape Ms Quinn in the house and stab her to death.

Ms O'Hara tells him not to talk about this on the phone.

The man says: "We will be fine. Don't worry. I'm going to enjoy this."

Ms O'Hara says she knows but says "technology is a killer".

When she discusses feeling down, the man says he can put an end to her suffering once and for all.

Ms O'Hara says "that's what you want more than killing someone else. You want to kill me."

In later discussions about killing someone, Ms O'Hara says she is afraid she will get caught and says she would not be able to keep quiet if they were caught.

Man tells O'Hara she was 'old and fat'

The court heard the man alleged to be Mr Dwyer told Ms O'Hara she would never find a full-time partner as she was "old and fat".

There is further discussion about finding someone for the man to stab.

Ms O'Hara says she has promised and will help him but she is not ready yet. The man says that is disappointing.

Ms O'Hara tells him he will not get away with it.

The 083 texter says no one was ever caught for Raonaid Murray or the homeless woman in the Phoenix Park.

The man says he will not and asks her if he can trust her to keep a secret. She says yes and he says good.

In October 2011, the man says he has had everything in the car.

He tried a few dry runs. But he says he always got too nervous or there were people around.

There is more discussion in which Ms O'Hara says she does not want to see the man any more, she says she needs a bit of loving.

The man says he will not cut her again. He offers to pay her. She says she is not a prostitute.

Later she tells the man she knows what the problem is. She says she is not good looking enough for him. She says he wants a trophy person. She says he is afraid of people seeing who he is.

"That's why you won't get your wife involved", she tells the man "and why you want to keep that side of yourself a secret".

She says she cannot trust the man. "I just can't."

The court heard Ms O'Hara tells the man using the 083 phone she wants the keys of her apartment back. He says he cannot find them.

The court was told two prepaid 086 phones which were later found in the Vartry Reservoir were bought on 30 November 2011 and there were exchanges between the two 086 phones.

The next communications gardaí have between the 083 number and Ms O'Hara's phone are in March 2012.

The man using the 083 phone suggests meeting up for "play".

Ms O'Hara says she really does not want the hassle.

The court heard there was no communication between 6 April and 6 May between any of the phones.

In May the 083 number again suggests meeting up but Ms O'Hara says she is busy with college exams and does not want distractions. She suggests July.

The 083 number says he will give her a shout in June.

The jury was told this morning it is possible they will begin their deliberations on Monday week.

Mr Justice Tony Hunt told the jurors that the prosecution hopes to complete its evidence some time tomorrow.

He told them legal matters would then arise and the jurors would probably not be required on Friday or Monday.

Justice Hunt said depending on what happened after that, there may be defence evidence in the case and Wednesday would be set aside for that.

That meant closing speeches from the prosecution and defence would take place on Thursday and Friday next week and he would begin his charge to the jury on the following Monday.

He said after that they would begin their deliberations, which would be as long or as short as necessary.