A former policeman in Northern Ireland, who is one of three men sought in connection with the racist incident involving Chelsea football fans on a Paris Metro train, has apologised for his involvement.

However, Richard Barklie, 50, insisted he is not a racist.

The ex-Royal Ulster Constabulary (RUC) and PSNI officer from Carrickfergus, is currently a director with the World Human Rights Forum and also works supporting victims of the Troubles.

The WAVE Trauma Centre, which supports victims of the Troubles, tonight said it had suspended a part-time worker pending further investigation into the Paris incident.

"As this matter is subject to an investigation by the Metropolitan Police it would not be appropriate to comment further at this stage," a spokesman said.

Mr Barklie, a Chelsea season ticket holder, is one of the three men whose images were released by Scotland Yard as part of an investigation into a group of supporters who allegedly pushed a black man off the train and chanted a racist song in Paris on Tuesday.

The incident happened ahead of Chelsea's Champions League clash with Paris Saint-Germain, which ended 1-1.

Footage posted online showed the commuter - named in reports as Souleymane S - being pushed back on to the platform amid chants of "we're racist, we're racist and that's the way we like it".

Mr Barklie issued a statement tonight through his lawyer in which he admitted involvement in an "incident" that resulted in Souleymane S being "unable to enter part of the train".

He said he had an account he wanted to provide to police that would explain the "context and circumstances".

Mr Barklie denied singing any racist songs; said he travelled to the game alone; insisted he did not know any of the other individuals captured on video footage of the incident; and said he has never been part of any "group or faction" of Chelsea fans.

The statement was issued by Belfast solicitor Kevin Winters.

"We act on behalf of Mr Barklie identified as one of the people sought by authorities investigating an incident on the Paris Metro on 16/2/15," it said.

A Metropolitan Police spokesman said the three men had now been identified and the force was liaising with the French authorities.

None of the men sought by Scotland Yard have been arrested.

A police spokesman said the force cannot arrest people for offences which happen outside the UK but "a number of people" have now been spoken to in relation to the incident.

Five people have so far been suspended from Chelsea's Stamford Bridge ground following investigations into the incident.

The club has reiterated its promise to ban for life anyone proved to have been involved in the altercation and is helping police in the UK and Paris. 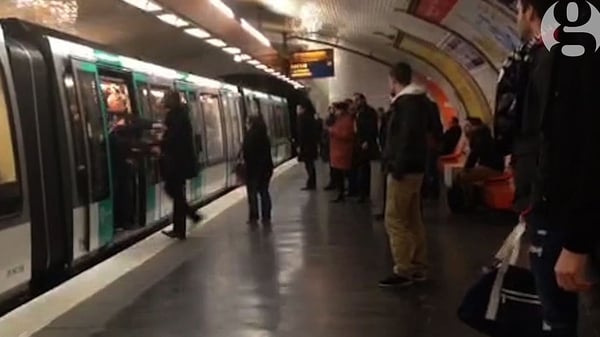