The failure of fathers to give their children ongoing example and guidance may be a major cause of problems among young people, Pope Francis has warned.

The Pontiff told thousands of pilgrims in the Vatican that fathers were so focused on themselves, on their work and at times their personal fulfilment, that they even forget their families, leaving children to their own devices.

Speaking at his weekly audience, he added: “The problem of our times no longer seems to be the invasive presence of fathers, but rather their absence.

"I would like to say to all Christian communities that we must be more careful: the absence of the paternal figure in the life of children and the young produces gaps and wounds that can be very serious.

“And in effect the deviances of children and adolescents may to a considerable extent be due to this lack of examples and authoritative guidance in their everyday life, to this lack of closeness and love from their fathers," the Pontiff added.

Pope Francis said the feeling of orphanhood experienced by many young people was more profound than we might think.

"They are orphans in their families because their fathers are often absent, also physically, from the home, but above all because when they are present, they do not act like fathers.

"At times it seems as if fathers are not sure what position they should occupy in the family, or how to educate their children. And so, in doubt, they abstain, they withdraw and neglect their responsibilities, possibly seeking refuge in an improbable relationship of parity with their children," he said.

Meanwhile, Pope Francis has met a Spanish transsexual and his fiancée at the Vatican.

Diego Neria Lejarraga, who is a practising Catholic, met the Pontiff after writing to him in December to complain he was being treated as an outcast in his parish in Plasencia in western Spain, according to the Spanish daily Hoy.

The 48-year old, who has undergone sexual reassignment surgery, told Pope Francis in the letter that he was treated poorly by parishioners and one priest had even called him "the devil's daughter".

The Argentine Pontiff, known for phoning people unannounced, rang Mr Lejarranga twice, including on Christmas Eve, and set up the meeting.

It took place on Saturday but was kept off the official calendar, media reports said. The Vatican would neither deny nor confirm the meeting took place.

Officially the Church does not recognise sex changes but Pope Francis has urged it to show greater compassion towards sections of society which have felt excluded from its embrace. 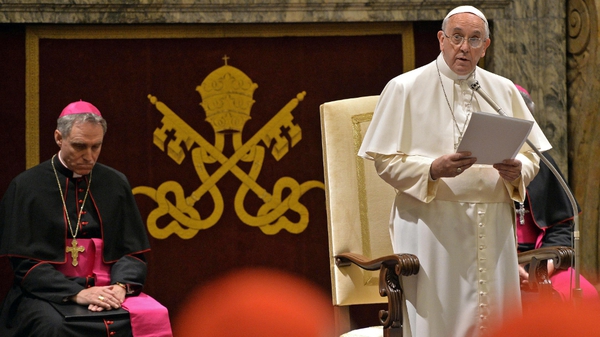