The High Court will give its decision in the case of a brain dead woman who is 18 weeks' pregnant on St Stephen's Day.

The woman's family want the woman's life support machine to be turned off.

The court will hear legal submissions from lawyers for all sides at 11am tomorrow morning.

Earlier, the court was told that there is no reasonable prospect for survival for the unborn, even if life support was to be continued.

Lawyers for the Health Service Executive told the High Court that the HSE's position was that based on the medical evidence to be called, there was no reasonable prospect of the unborn child being born alive if life support measures were continued.

Senior Counsel Gerry Durcan told the court it was not practicable to vindicate any right to life of the unborn child in this case.

He said the HSE believed the appropriate declaration for the court to make was that the discontinuance of life support was lawful in the circumstances of this case.

The court heard the woman's father wants the life support machine turned off and this application is being supported by her partner and father of the unborn child, and her extended family.

Lawyers for the woman's father said the Eighth Amendment to the Constitution dealing with the equal rights to life of the mother and the unborn child did not apply in this case, as the unborn was of such a young gestational age when the mother died that it could not be viable.

The woman's father told the court he was told his daughter was dead at the end of November.

He said he was told she had to be put on life support because the unborn had a heartbeat and he found this very "distressful".

The woman's father said he believed she was slowly deteriorating and did not look like his little girl.

He said the family had discussed the situation and had come to the decision that the life support machine should be turned off.

The man said his daughter was dead and the chance of the unborn surviving was minimal.

The woman has two other children, who had both visited their mother.

He said they had been told that their mummy was sick and was being looked after by nurses until angels came to get her.

The man said the youngest child refused to look at the woman while visiting her at the last visit.

The oldest child had become very emotional afterwards and asked if that would be the last time to see mummy.

The father told the court he wanted his daughter to have dignity and to be put to rest.

The father of the unborn child also gave evidence to the court.

He said he had discussed the matter with his partner's father and they believed it was the best decision and they were happy about it.

He said his partner was happy about the pregnancy and they had discussed names for the child.

Woman not alive at any level - expert

An expert in intensive care medicine, Dr Brian Marsh, said in his opinion, the woman was not alive at any level, medically speaking. He said she had become a corpse.

Dr Marsh said he had seen her last night and he said his best judgment was that sustaining this patient was not feasible for a long period of time.

He said the unborn child would need to be brought to around 32 weeks' gestation and he did not believe that was possible.

Dr Marsh said the ongoing environment for the unborn was abnormal and may lead to injury or damage to the unborn.

Dr Marsh said there had been two other similar cases reported in Ireland.

In both cases, the foetus had died within a relatively short period of time. These were also at a very young gestational age.

Internationally, he said, there were a total of nine similar cases and three babies had survived.

Opening the application, Senior Counsel, John Rogers, for the woman's father, said the woman had been admitted to hospital in late November suffering from headaches and vomiting.

She had fallen on 29 November and had become unresponsive. Her time of death was recorded at 5.20pm on 3 December.

Mr Rogers said lawyers for the woman's father were of the view that the Eighth Amendment to the Constitution dealing with the right to life of the unborn was not applicable in this case.

He said because of the gestational age of the foetus when the mother died, there was no real likelihood of the viability of such an unborn.

Mr Rogers said the father wanted his daughter's death accomplished with appropriate dignity and that had been interrupted. That is why we are here, he said. 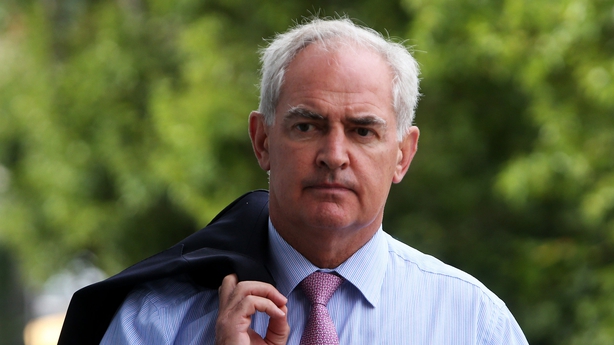 Expert consultant obstetrician Dr Peter Boylan (above) told the court this was an extraordinarily rare situation.

He said he could not find cases where there had been successful outcomes where life support had been begun where the foetus was at a gestational age of 13 weeks.

Dr Boylan said he was in no doubt that the continuance of life support in this case was "experimental" and he said doctors were in "uncharted territory".

He said the woman had been declared dead on 3 December after doctors established there was no blood flow to the brain.

Dr Boylan said hospital notes showed the next day, the family had been spoken to at length about the interpretation of Irish constitutional law.

He said the family was obviously concerned about why she was not being allowed to die with dignity and the constitutional position explained to them.

Dr Boylan said the doctors at the Dublin hospital were right to seek legal advice.

He said that legal advice left them with little choice but to continue life support, even against the wishes of the next-of-kin.

He said doctors in Ireland were unclear what they could do as a consequence of the Eighth Amendment.

They were not legally qualified and had to be guided by the courts.

Dr Boylan agreed that the introduction of legal and medical guidelines would be extremely helpful.

He said the removal of the Eighth Amendment would be even more helpful.

However, he said the circumstances in this case were entirely different from an abortion.

He said the unborn in this case was effectively in an intensive care unit in its mother's womb. He said care could be withdrawn from both, which would allow the mother to be buried.

Dr Boylan said this would be entirely different from a termination.

He said one concern was that the unborn could be born extremely prematurely due to the mother's body suffering a severe infection.

This could result in the worst of all worlds, where you could have an extremely sick premature newborn with severe difficulties.

Dr Boylan said the mother is being maintained in a regional hospital that does not have the neonatal facilities available in the main Dublin maternity hospitals.

The consultant obstetrician said in any other jurisdiction the woman would be allowed to die with dignity.

He said the most ethical action would be to stop life support in line with the wishes of the next-of-kin.

Dr Boylan also said, at the moment, there was no indication that the unborn was compromised in itself.

'Small' chance of survival for unborn

Clinical Director of the Rotunda Maternity Hospital Dr Peter McKenna told the court that if life support were to be continued, it would be going from the extraordinary to the grotesque.

Dr McKenna said he agreed with other doctors who had given evidence that they were in uncharted territory.

Dr McKenna said he could see why "we are where we are", but he said he did not think that justified continuing any further.

He said he was firmly of the view that the appropriate thing to do would be not to continue support.

A neurosurgeon treating the woman at a Dublin hospital told the court they felt obliged to maintain the woman on life support after they declared her to be dead because of the Eighth Amendment.

He said they had not followed the family's wishes and turned off the life support machine because they were very uncertain of the legal standing.

The doctor said they did not know the legal status of the foetus. He said he had seen dreadful things, but he had never seen this.

He said the way the family had dealt with the situation was touching and humbling. He said it was very, very difficult not to be able to follow the family's wishes.

The neurosurgeon said they tried to get a written legal opinion on the situation.

He agreed with lawyers for the woman's father that no one had ever told them they were obliged to maintain the woman on life support.

He said the reason they felt obliged is that they were three clinicians trying to figure out the Eighth Amendment.

One of the doctors treating the woman said he did not see any hope of the baby surviving with the "storm" going on around it.

He said he would give up all hope for the baby and said the woman was deteriorating rapidly.

The doctor said he would be prepared to withdraw life support treatment in consultation with the family.

He said he had written a report on 19 December in which he said the baby was progressing well. He said at that point the storm surrounding the baby had not reached it yet.

Asked why he seemed to have changed his mind about the prognosis for the baby, he said the infection had become evident over last few days.

He said the woman's brain was pouring toxins into her bloodstream and he said that was not going to help the baby either.

The doctor said this would undoubtedly affect the baby and he did not think it was viable.

He said it had all the signs of a perfect storm and the woman's situation did not seem to be improving. He said he knew the woman was dead.

Earlier, a consultant in intensive care medicine said the woman bore no resemblance to how she used to look.

Dr Frances Colreavy said she assessed the woman yesterday and she did not look good. She said the woman was very puffy.

Dr Colreavy said nursing staff had applied make-up to her because her children were coming to visit her.

She said one of the children was very distressed when they saw her.

Dr Colreavy said she had never experienced this sort of case before.

She said the woman felt very hot to the touch and was suffering from a number of infections.

Dr Colreavy said the woman's brain was rotting and there was an open wound on her head.

She said the woman's abdomen looked unlike any other pregnant abdomen she had ever seen and she was concerned there was an infection in her abdomen.

Dr Colreavy said there were problems regulating fluid in the woman's body and the woman's blood pressure was high.

She said she did not think it was possible or to be recommended to continue life support until the baby was viable.

Dr Colreavy said she was 19 years in intensive care medicine and was in uncharted territory.

She said she had never come across a case where someone who was brain dead had been maintained on life support for 20 days.

Dr Colreavy said people were normally kept on life support for a number of days to facilitate organ donation.