The bodies of 230 people killed by the Islamic State group have been found in a mass grave uncovered by their relatives in Syria's Deir Ezzor province, a monitoring group said.

The discovery brings the number of Shaitat tribal members killed during the jihadists' summer advance in Deir Ezzor province near Iraq to more than 900, the Syrian Observatory for Human Rights said.

The British-based group said it had "learned from trusted sources that more than 230 bodies have been found in a mass grave in the desert near Al-Kashkiyeh in the east of Deir Ezzor".

The "vast majority" were civilians, many of them executed after the tribe rose up against the self-proclaimed Islamic State after it had driven out rival jihadists and rebels from the area.

IS controls large swathes of northern and eastern Syria, as well as parts of neighbouring Iraq.

Hundreds more members of the Shaitat tribe are still missing, said the Observatory, which relies on a large network of activists, doctors and military sources on all sides of the Syrian conflict for its reports.

The tribes people discovered the grave as they returned to their villages from months of displacement after losing their battle against IS.

They have been allowed to return only after agreeing to respect an IS-imposed curfew, as well as a prohibition on gatherings and weapons.

Anyone who fights IS, according to the jihadists' rules, will be considered a heretic and executed.

The jihadist group first emerged in Syria's war in spring 2013 and has since committed some of the war's worst atrocities.

Reported discoveries of such graves have been rare in the Syrian conflict, which broke out in March 2011 when President Bashar al-Assad's forces unleashed a bloody crackdown on pro-democracy protests.

In February, when IS withdrew from Aazaz, in the northern province of Aleppo, the Observatory said a possible mass grave was found in the town.

But such atrocities have been much more frequent in neighbouring Iraq, where thousands of people have gone missing since the jihadists overran large parts of the country this year. 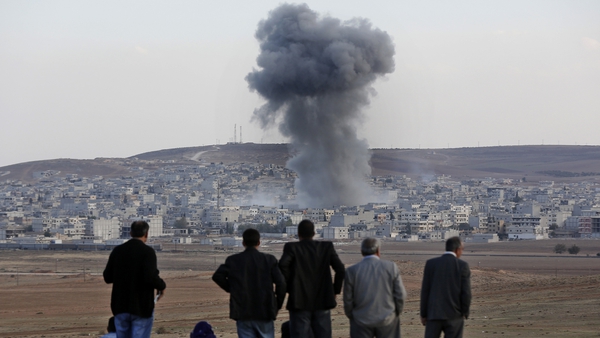